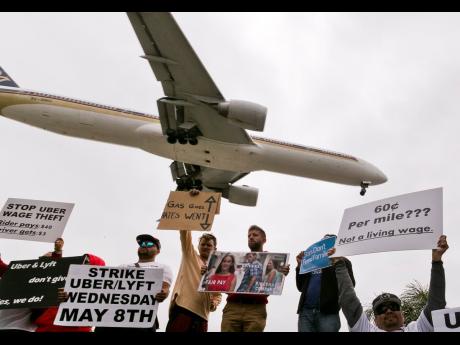 The Associated Press
In this Wednesday, May, 8, 2019 file photo, drivers for ride-hailing companies Uber and Lyft hold a rally at a park near Los Angeles International Airport.

A fare war between Uber and Lyft has led to billions of dollars in losses for both ride-hailing companies as they fight for passengers and drivers.

But in one way, it has been good for investors who snatched up the newly public companies’ stock: The losses have scared off the competition, giving the leaders a duopoly in almost every American city.

The two San Francisco companies have already lost a combined US$13 billion. And with no clear road to profits ahead, no one else has much of an incentive to mount a challenge using the same model relying on people driving their own cars to pick up passengers that summon them on a smartphone app, said Susan Shaheen, co-director of the Transportation Sustainability Research Center at the University of California, Berkeley.

Even if another rival dared enter the market, it would likely be difficult to raise enough money to pose a viable threat after Uber and Lyft spent the past decade pulling in billions of dollars from venture capitalists. And in the past six weeks, they raised an additional US$10.4 billion in their recently completed initial public offerings of stock.

“There’s only a duopoly because both companies have enough capital to compete with each other and no one else does,” said Gartner analyst Michael Ramsey.

It’s likely to remain that way until any of dozens of companies trying to create self-driving cars refine their technology so they can launch a network of robotic taxis that removes human drivers from the equation. That breakthrough could enable them to slash their fares below the prices currently being charged by Uber and Lyft.

Google spin-off Waymo has made no secret of its intention to muscle its way into the ride-hailing market with a fleet of self-driving cars built on technology that it has been working on for the past decade.