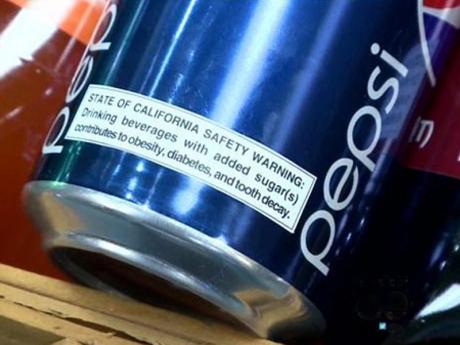 SACRAMENTO, California (AP) — Sodas and other sugary drinks sold in California would come with warning labels about obesity, diabetes and tooth decay under a bill that narrowly cleared the state Senate on Thursday despite strong opposition from the beverage industry.

The Senate voted 21-11 on Thursday to require warning labels on drinks that contain 75 calories or more of added sugar or sweeteners per 12 fluid ounces.

The labels would be similar to those on cigarette cartons, denoted by an explanation mark inside of a triangle and placed on the front of the container in bold type and separate from all other information.

Retailers serving fountain drinks, including retailers, would have to put up signs warning their customers.

The Department of Public Health would enforce the law, issuing warnings for a first violation and fines of up to $500 for every violation after that.

But retailers would be shielded from lawsuits brought by consumers.

“We are not removing the product from the shelves. We are informing choice. It’s a public right to know,” said bill author Senator Bill Monning, D-Carmel.

The bill had significant opposition from the beverage industry.

Records show the American Beverage Association spent more than $273,000 since January lobbying against that bill and others, including taking lawmakers and their aides to Sacramento Kings’ games.