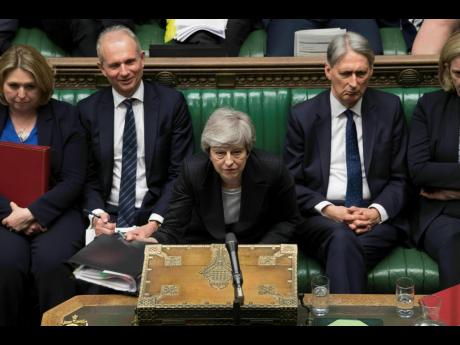 British Prime Minister Theresa May was hunkered down with close allies on Thursday as she considered whether to give in to relentless pressure to resign, or fight on to save her Brexit plan and her premiership.

May’s fate looked sealed after the resignation late Wednesday of Cabinet minister Andrea Leadsom, who quit saying she could not support the European Union (EU) withdrawal bill that May plans to introduce to Parliament.

Leadsom, as leader of the House of Commons, said she could not support May’s Brexit plan because it did not “deliver on the referendum result” that saw voters in 2016 opt to leave the EU.

“No one has wanted you to succeed more than I have, but I do now urge you to make the right decisions in the interests of the country, this government and our party,” Leadsom wrote in a resignation letter to May.

The number of Conservative lawmakers calling on May to resign is growing. The party’s legislators want May to agree Friday that she will quit, triggering a Conservative leadership contest. If not, they are likely to try to topple her.

“I want her to give a timetable for when she will go,” said Geoffrey Clifton-Brown, treasurer of the committee that oversees Conservative leadership races.

He said that if she did not set a departure date there would be “overwhelming pressure” for a no-confidence vote in her.

If May quits as party leader she will likely remain as caretaker prime minister for several weeks while Conservative lawmakers and members vote to elect a successor.

Foreign Secretary Jeremy Hunt said Thursday that May would still be in post when United States President Donald Trump comes to Britain for a June 3-5 state visit.

“Theresa May will be prime minister to welcome him, and rightly so,” Hunt said.

May became prime minister soon after the June 2016 EU membership referendum, and has spent her entire term in office trying to deliver on that decision.

She seemed close to success when she struck a divorce agreement with the EU late last year. But lawmakers have rejected it three times, and Britain’s long-scheduled departure date of March 29 passed with the country still in the bloc.