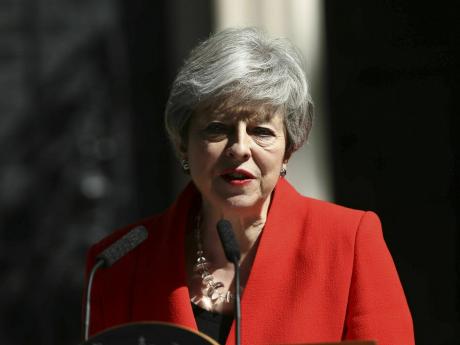 Britain's Prime Minister Theresa May makes a statement outside at 10 Downing Street in London, Friday, May 24, 2019. Theresa May says she'll quit as UK Conservative leader on June 7, sparking contest for Britain's next prime minister. (Yui Mok/PA via AP)

LONDON (AP) — Bowing to the inevitable, Theresa May announced Friday that she will step down as U.K. Conservative Party leader in two weeks, admitting defeat in her attempt to take Britain out of the European Union and sparking a contest to replace her as prime minister.

May said she will quit as head of the governing party on June 7 but stay as caretaker prime minister until the new leader is chosen, a process the Conservatives aim to complete by late July.

The new Conservative leader will become prime minister without the need for a general election and will take up the task of trying to secure Britain’s exit from the EU.

May, who has been battling to unite her fractious party ever since she took the helm almost three years ago, said: “I have done my best.” But she conceded that had not been enough.

Her voice breaking, May said in a televised statement outside 10 Downing St. that she would soon be leaving a job that it has been “the honour of my life to hold.”

May became prime minister the month after the U.K. voted in June 2016 to leave the European Union, and her premiership has been consumed by the attempt to deliver on that verdict.

May spent more than a year and a half negotiating an exit agreement with the EU, only to see it rejected three times by Britain’s Parliament.