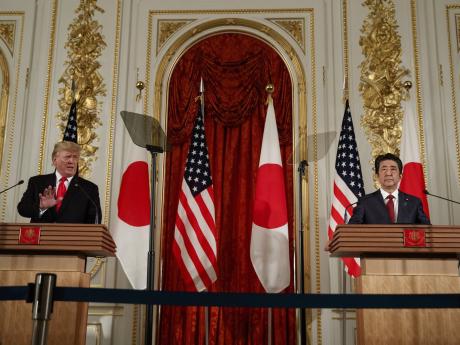 The visit was designed to highlight the U.S.-Japan alliance and showcase the warm relations between the leaders.

Trump said he and Abe deliberated over economic issues, including trade and Iran, during hours of talks at the Akasaka Palace.

But North Korea’s recent firing of short-range missiles emerged as an area of disagreement at a press conference Monday.

Asked if he was bothered by the missile tests, Trump said: “No, I’m not. I am personally not.”

Japan has long voiced concern about short-range missiles because of the threat they pose to the Island nation’s security.

Trump also said he disagrees with the assessment of many experts — as well as his own national security adviser — that the tests violate U.N. Security Council resolutions.

Standing beside Trump at a news conference held after hours of talks, Abe, who has forged a strong friendship with Trump and showered him with praise throughout the day, disagreed with the U.S. president, saying the missile tests were “of great regret.”

The Republican president has sought to downplay the significance of the missile tests, even though his own national security adviser, John Bolton, said over the weekend that they violated the U.N. resolutions.

Trump was invited to Japan to be the first world leader to meet with the country’s new emperor.