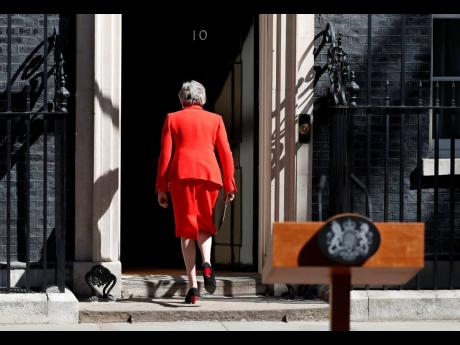 The Associated Press
British Prime Minister Theresa May walks away after announcing her resignation, outside 10 Downing Street in London, England on Friday. 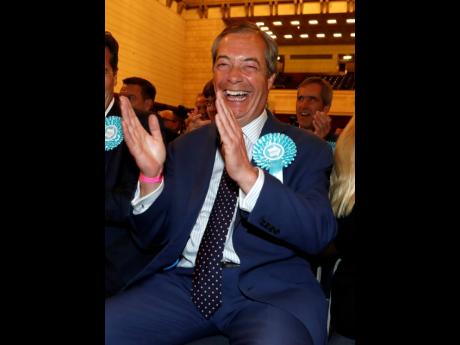 The Associated Press
Brexit Party leader Nigel Farage reacts as results are announced at the counting centre for the European elections for the South East England region in Southampton on Sunday.
1
2

Nigel Farage, leader of the newly founded Brexit Party, said Monday that Britain should get ready to break free from the European Union (EU) even if there is no agreement on a divorce deal. His comments came after the Brexit Party and pro-EU forces trounced Britain’s mainstream parties in the European Parliament election.

The United Kingdom’s (UK) governing Conservative Party was all but wiped out in the election to send lawmakers to Brussels, blamed by angry voters for leading Britain into a political impasse and failing to lead it out of the EU.

With results announced Monday for all regions in the UK except Northern Ireland, the Brexit Party had won 29 of the 73 British EU seats up for grabs and almost a third of the votes. On the pro-EU side, the Liberal Democrats took 20 per cent of the vote and 16 seats – a dramatic increase from the single seat it won in the last EU election in 2014.

The opposition Labour Party came third with 14.1 per cent, followed by the pro-European environmentalist Greens, who captured nearly 12.1 per cent. The ruling Conservatives – apparently blamed by voters for failing to deliver Brexit in March as planned – were in fifth place with under 10 per cent of the vote.

The election leaves Britain’s EU exit ever more uncertain, with both Brexiteers and pro-EU ‘remainers’ able to claim strong support. The result raises the likelihood of a chaotic ‘no deal’ exit from the EU – but also the possibility of a new referendum that could reverse the decision to leave.

A triumphant Farage said his party would “stun everybody” in the next British general election if the country didn’t leave the EU on the currently scheduled date of October 31.

He told a press conference Monday afternoon that it’s not likely that a new Conservative prime minister will be strong enough to take Britain out of the EU by that date.

“The Conservative Party are bitterly divided, and I consider it to be extremely unlikely that they will pick a leader who is able to take us out on the 31st October,” he said.

British Prime Minister Theresa May, who is stepping down as Conservative leader next month after failing to deliver Brexit, said the “disappointing” result of the European vote “shows the importance of finding a Brexit deal, and I sincerely hope these results focus minds in Parliament”.

But the election is likely to harden the uncompromising stance of the candidates vying to succeed her. There are nine announced contenders thus far, with Home Secretary Sajid Javid announcing Monday that he, too, will seek the top spot.

Most businesses and economists think leaving the EU with no agreement on departure terms and future relations would cause economic turmoil and plunge Britain into recession. But many Conservatives think embracing a no-deal Brexit may be the only way to win back voters from Farage’s party.

Boris Johnson, the current favourite to replace May and become Britain’s next prime minister, tweeted: “The message from last night’s results is clear. It is time for us to deliver Brexit.”

Labour paid for a fence-sitting Brexit policy in which it dithered over whether to support a new referendum that could halt Brexit.

Some senior Labour figures said after the party’s weak performance that it must now take a strong stance in favour of a second referendum on Brexit, but party leader Jeremy Corbyn has resisted making any clear commitment on this.