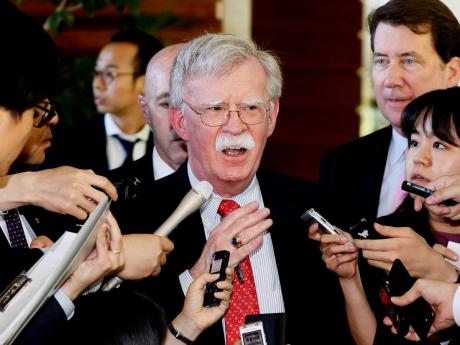 The statement by an unidentified North Korean Foreign Ministry spokesperson came as US President Donald Trump visited Japan for meetings with Prime Minister Shinzo Abe at which the nuclear stand-off with North Korea was expected to be high on the agenda.

Bolton told reporters in Tokyo on Saturday that there was “no doubt” that North Korea’s recent missile launches violated UN resolutions and that sanctions against the North must be kept in place. Trump later downplayed the missile tests, tweeting, “North Korea fired off some small weapons, which disturbed some of my people, and others, but not me.”

North Korea tested short-range ballistic missiles on May 4 and 9, ending a pause in launches that began in late 2017. The tests were seen as a way for North Korea to pressure Washington to soften its stance on easing sanctions against it without actually causing negotiations to collapse.

In the statement carried by the North’s Korean Central News Agency, the North Korean spokesperson said the North was exercising its right of self-defence with the launches. North Korea has never recognised the UN Security Council resolutions, which it views as denying its “rights to existence and development of a sovereign state”, the statement said.

“If any object is launched, it is bound to fly in trajectory,” the statement said. It said a demand that North Korea ban all launches that use ballistic technology regardless of the range is the same as asking it to relinquish its right to self-defence.

The spokesperson said Bolton was an “ignorant” hardliner who, throughout different US administrations, pushed provocative policies against North Korea including endorsements of pre-emptive strikes and regime change.

The spokesperson also said that Bolton’s “hammer act” was responsible for the collapse of a major nuclear deal between the countries reached in 1994, when North Korea agreed to halt its nuclear programme in exchange for US fuel aid. The deal broke down in 2002 after US intelligence agencies said North Korea was continuing its pursuit of bombs with a secret uranium-enrichment programme.

“It will be fit to call Bolton not a security adviser striving for security but a security-destroying adviser who is wrecking peace and security,” the spokesperson said. “It is not at all strange that perverse words always come out from the mouth of a structurally defective guy, and such a human defect deserves an earlier vanishing.”