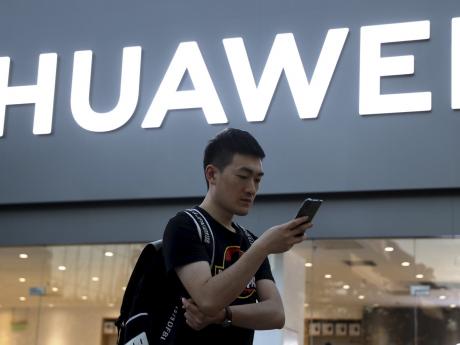 In this Monday, May 20, 2019 photo a man uses his smartphone outside a Huawei store in Beijing. Chinese tech giant Huawei has filed a motion in U.S. court challenging the constitutionality of a law that limits its sales of telecom equipment. (AP Photo/Ng Han Guan)

SHENZHEN, China (AP) — Fighting to maintain its access to major markets for next-generation communications, Chinese tech giant Huawei is challenging the constitutionality of a U.S. law that limits its sales of telecom equipment.

Huawei’s chief legal officer, Song Liuping, said Wednesday that Huawei filed a motion asking a court in Plano, Texas, for a summary judgment on whether a U.S. military spending provision that bars the government and its contractors from using Huawei equipment is constitutional.

The lawsuit comes as the U.S. and China are embroiled in a broader trade war in which both sides have imposed billions of dollars of punitive tariffs against each other’s products.

Chinese state media suggested Wednesday that the country’s rich supply of rare earths — key elements for high-tech manufacturing — could be used as leverage against the U.S. in the dispute.

Huawei is the biggest global maker of network equipment and enjoys a lead in 5G, or fifth-generation, technology. It also is the No. 2 maker of smartphones.

The Trump administration says the company could use its equipment to spy on behalf of the Chinese government and is thus a threat to international cybersecurity.

“This decision threatens to harm our customers in over 170 countries, including more than 3 billion customers who use Huawei products and services around the world,” Song said at a news briefing.

Huawei, whose U.S. headquarters is in Plano, launched a lawsuit in March against the U.S. national defence law, calling the provision a “bill of attainder” that selectively punishes Huawei and violates its due process by presuming its guilt without a fair trial.

The summary judgment motion seeks to accelerate the legal process to give U.S. customers access to Huawei equipment sooner, Huawei said in a statement.