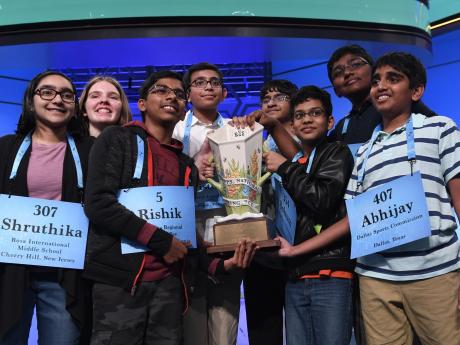 The eight co-champions of the 2019 Scripps National Spelling Bee hold the trophy at the end of the competition in Oxon Hill, Maryland Friday, May 31, 2019. (AP Photo/Susan Walsh)

They were better than anything the Scripps National Spelling Bee could throw at them.

And they all ended up with a hand on the trophy.

In the most extraordinary ending in the 92-year history of the competition, the bee ended in an eight-way tie on Thursday night.

This year’s bee had the biggest field ever, with 562 spellers, more than half of whom got in through Scripps’ wild-card program.

Last year was the first time that wild cards were allowed into the bee, and the eventual champion was a wild card.

Thursday’s finalists include nine spellers who finished in at least a tie for 10th last year.

The field will be narrowed to about a dozen spellers in the morning and early afternoon before the prime-time finals on ESPN.

The last 14 champions and 19 of the past 23 have been Indian-American.