Trump gets pushback on promise of new Mexican tariffs 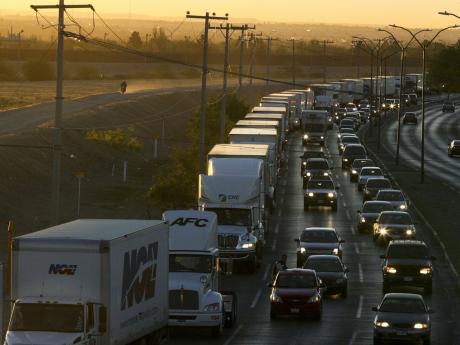 In this April 9, 2019, file photo, trucks wait to cross the border with the U.S. in Ciudad Juarez, Mexico. In a surprise announcement that could compromise a major trade deal, President Donald Trump announced Thursday that he is slapping a 5% tariff on all Mexican imports to pressure the country to do more to crack down on the surge of Central American migrants trying to cross the U.S. border. (AP Photo/Christian Torres, File)

WASHINGTON (AP) — In a surprise announcement that could derail a major trade deal, President Donald Trump says he is placing a 5% tariff on all Mexican imports, effective June 10, to pressure the country to do more to crack down on the surge of Central American migrants trying to cross the U.S. border.

He said the percentage will gradually increase — up to 25% — “until the Illegal Immigration problem is remedied.”

The decision showed the administration going to new lengths, and looking for new levers, to pressure Mexico to take action — even if those risk upending other policy priorities, like the United States-Mexico-Canada Agreement, a trade deal that is the cornerstone of Trump’s legislative agenda and seen as beneficial to his reelection effort.

It also risks further damaging the already strained relationship between the U.S. and Mexico, two countries whose economies are deeply intertwined.

Trump made the announcement by tweet after telling reporters earlier Thursday that he was planning “a major statement” that would be his “biggest” so far on the border.

“On June 10th, the United States will impose a 5% Tariff on all goods coming into our Country from Mexico, until such time as illegal migrants coming through Mexico, and into our Country, STOP,” he wrote.

“The Tariff will gradually increase until the Illegal Immigration problem is remedied.”

Mexican President Andrés Manuel López Obrador responded in a public letter late Thursday, telling Trump that “social problems are not solved with duties or coercive measures” and alluded to the United States’ history as a nation of immigrants.