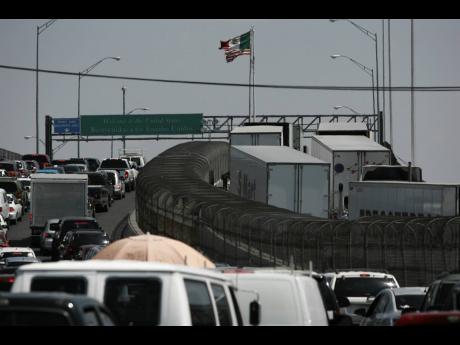 AP
Trucks line up at the Corboba-Las Americas international bridge to cross with their cargo from Mexico into the United States in Ciudad Juarez, Mexico, last Friday. President Andrés Manuel López Obrador said Mexico won’t panic over US President Donald Trump’s threat of coercive tariffs, measures that economists say could have dramatic consequences for both nations and potentially spur a full-blown trade war.

The momentum that supporters have tried to build for a new North American trade deal has run into some Trump turbulence.

The Trump administration had taken steps in recent weeks to work with Democratic and Republican lawmakers to address concerns about the proposed United States-Mexico-Canada agreement.

Then President Donald Trump made his threat this past week of a five per cent tariff on Mexican imports unless America’s southern neighbour cracked down on Central American migrants trying to cross the US border.

His recent decision to remove US tariffs on steel and aluminium imports from Canada and Mexico had appeased mostly Republicans who were using their trade vote as leverage to do away with those penalties.

The administration also had committed to meeting with a group of House Democrats to allay their concerns. That gesture created goodwill, and as House Speaker Nancy Pelosi described it, put Democrats “on a path to yes”.

Now it’s unclear where that path may lead.

“The last thing we want to do is put that landmark deal – and the two million manufacturing jobs that depend on North American trade – in jeopardy,” said Jay Timmons, president and CEO of the National Association of Manufacturers.

The US Chamber of Commerce said it was considering legal action to block the tariffs from going into effect.

Some GOP senators are rankled, too, most notably Charles Grassley of Iowa, chairman of the Senate Finance Committee.

“This is a misuse of presidential tariff authority and counter to congressional intent,” Grassley said.

Congressional aides from both parties said that it’s too soon to say whether Trump’s proposal will derail the agreement. But it does make it harder for lawmakers to assess how the agreement would improve the economic landscape if the tariffs on Mexico go into place.

Hours before Trump announced his tariff plan, his administration tried to set up the agreement for a possible congressional vote before the August recess. The administration completed the formal steps necessary to start the clock for submitting legislation to Congress.

Pelosi said that was “not a positive step” and “indicates a lack of knowledge on the part of the administration on the policy and process to pass a trade agreement”.