Trump family to get red-carpet treatment on state visit 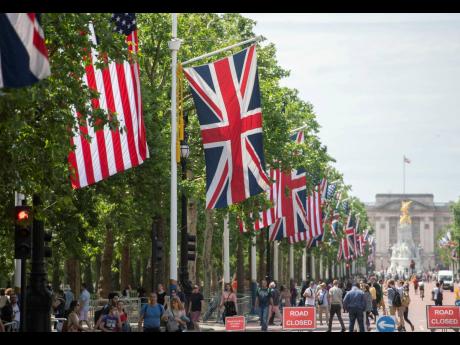 National flags of the United Kingdom and the United States of America line The Mall thoroughfare in London leading to the gilded Queen Victoria Monument standing in front of Buckingham Palace on Sunday June 2, 2019, ahead of a state visit to the UK by US President Donald Trump. Trump will arrive in London on Monday for an official state visit with full ceremony and toasts, topped by a magnificent banquet at Buckingham Palace.

It’s a unique odd couple: A 93-year-old sovereign who has made a point of keeping her opinions to herself during her long reign is hosting a 72-year-old reality TV star-turned-president who tweets his uncensored thoughts daily to 60 million followers.

For Queen Elizabeth II, Britain’s unflappable monarch, the arrival of United States (US) President Donald Trump, his family and his armoured entourage on Monday means a full day of ceremony and toasts topped by a magnificent banquet at Buckingham Palace.

Yet beneath the pomp and ceremony, there are differences aplenty.

There will be a formal tea Monday afternoon hosted by Prince Charles and his wife, Camilla, for Trump and First Lady Melania Trump, which brings together a future king who has warned about the perils of climate change for years and a president who is actively dismantling US policies designed to slow global warming.

On the political front, Trump meets Tuesday with British Prime Minister Theresa May only days before she steps down Friday as Conservative Party leader, kicking off a race to succeed her as prime minister.

Trump professes friendship for May, but he has been harshly critical of her handling of Britain’s tortured Brexit negotiations with the European Union (EU). He has also buddied up to former Foreign Secretary Boris Johnson, a May critic who hopes to follow her into power, and Brexit Party leader Nigel Farage, who accuses May of incompetence and betrayal.

Trump ramped up his interference in British politics by telling the Sunday Times that Britain should “walk away” from talks and refuse to pay a £39-billion (US$49 billion) divorce bill if it doesn’t – get better terms from the EU. He also said Farage should be given a role in the Brexit negotiations.

Officials on both sides of the Atlantic say the long-delayed state visit will celebrate the vaunted “special relationship” between Britain and the US.

It was timed to coincide with solemn ceremonies in Britain on Wednesday and in France on Thursday marking the 75th anniversary of the D-Day invasion.