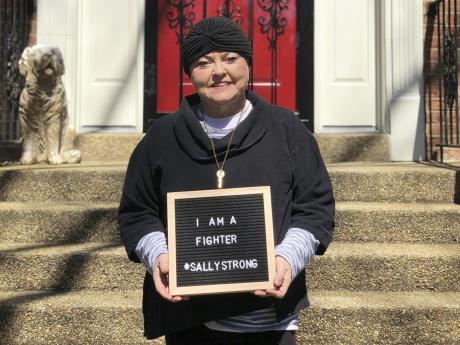 This March 26, 2018 photo provided by Ashley Atwater shows her mother, Sally Atwater, outside her home in the Georgetown area of Washington, a few days after leaving the hospital. Atwater's doctor spent two months on calls, messages and dozens of pages of forms to get her an experimental drug he thinks can fight the lung cancer that has spread to her brain and spine. (Courtesy Ashley Atwater via AP)

CHICAGO (AP) — Sally Atwater’s doctor spent two months on calls, messages and paperwork to get her an experimental drug he thinks can fight the lung cancer that has spread to her brain and spine.

Nancy Goodman begged eight companies to let her young son try experimental medicines for a brain tumour that ultimately killed him, and “only three of the companies even gave me a reason why they declined,” she said.

Thousands of gravely ill cancer patients each year seek “compassionate use” access to treatments that are not yet on the market but have shown some promise in early testing and aren’t available to them through a study.

Now the government wants to make this easier and give more heft to the requests.

On Monday at a cancer conference in Chicago, the Food and Drug Administration announced a project to have the agency become the middleman.

Instead of making doctors plead their case first to companies and then to the FDA if the company agrees to provide the drug, the FDA will become the initial step and will assign a staffer to quickly do the paperwork.

That way, when a company gets a request, it knows the FDA already considers it appropriate.

“We are here to help. We are not here to make a drug company give a specific drug to a patient.

We don’t have that authority,” said Dr. Richard Pazdur, the FDA official leading the effort.

But the agency gets little information now on how many requests are turned down and why.