US tariffs looming, many in Mexico back president’s approach 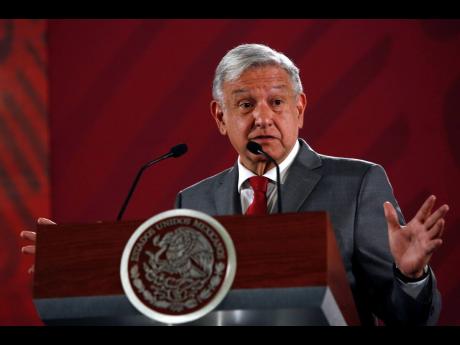 Facing possible crippling tariffs US President Donald Trump is threatening to impose on the United States’ biggest trading partner, Mexican President Andrés Manuel López Obrador has responded with calm and calls for continued friendship, and avoided strong language that could cause the dispute to deteriorate.

He wants dialogue, not a Twitter spat, and much less a trade war with the country that buys 80 per cent of Mexican exports. Mexicans have seen enough Trump tweets not to think the sky is falling even at this latest threat, and while some might wish their president would take a couple of swings at a figurative Trump pinata, most seemed to think López Obrador was taking the right approach in trying to head off the tariffs.

“We do not want conflict, a war. Let us avoid that,” said Gilberto Lozoya, a 26-year-old in the northern city of Nuevo Laredo, across the border from Laredo, Texas, who works for a factory that exports boilers for US brands like Whirlpool.

The business stands to take a hit if the tariffs, starting at five per cent and rising as high as 25 per cent, take effect on a Monday deadline Trump has given Mexico for slowing irregular migration through its territory. And while Lozoya feels his country could probably do more on that issue, he believes things are in good hands with López Obrador.

“The way the president has responded is very good,” Lozoya said. “He is a very sensible person.”

The Mexican government, which has struggled to cope with large numbers of mostly Central American migrants, has not publicly proposed any new policies, instead seeming to opt for a strategy of convincing Washington that it is already doing its part on migration.

Under López Obrador, who took office December 1, Mexico has increased deportations and highway checkpoints in the south while raiding migrants travelling in a large caravan and atop freight trains. It has also insisted that human rights are at the core of its policy, and said it won’t criminalise migration.

Where previous President Enrique Peña Nieto was roundly criticised for not taking a more forceful line in responding to then-candidate and later President Trump, López Obrador does not seem to have suffered significant backlash over his handling of the latest tiff between the North American neighbours.

A poll tracking his day-to-day popularity saw it rise about four points from Trump’s announcement May 27 to nearly two-thirds approval as of Tuesday. And on Sunday, voters handed López Obrador’s Morena party the governorships in two states with significant trade ties to the United States – Puebla, home to a Volkswagen plant, and Baja California, which borders California and is dotted with manufacturing and assembly plants known as ‘maquiladoras’.

Index, a national business chamber representing export manufacturers, said in a recent statement that it fully supports the Cabinet-level Mexican delegation that travelled to Washington to negotiate, while urging officials to take action on immigration issues that Trump has complained about. It also called on negotiators to separate trade from immigration.

Isidro Morales, a political scientist at the Monterrey Institute of Technology and Higher Education, said it was astonishing that trade threats would be used as leverage to force Mexico on the unrelated issue of migration. He complained that Trump “is creating an environment of uncertainty”.