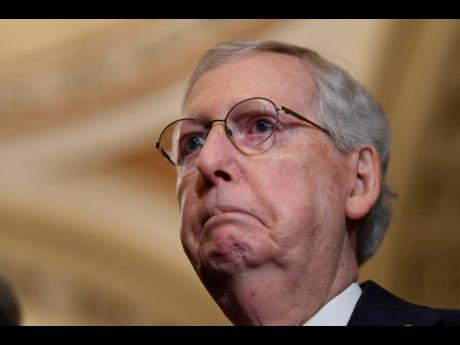 In a rare confrontation, Republican senators are declaring deep opposition to President Donald Trump’s threatened tariffs on all goods coming into the US from Mexico. But it’s unclear they have the votes to stop him, and Trump said they’d be “foolish” to try.

All sides, including officials from Mexico meeting with Trump negotiators in Washington this week, remain hopeful that high-level talks will ease the president away from his threat. But with the tariffs set to start next Monday – and Trump declaring them “more likely” than not to take effect – fellow Republicans in Congress warned the White House that they are ready to stand up to the president.

The public split and looming standoff over five per cent tariffs on all goods imported from Mexico revealed a fundamental divergence in values between the president and his party. Trump uses tariffs as leverage to get what he wants, in this case to force Mexico to do more to halt illegal immigration. For Republicans, tariffs are counter to firmly rooted orthodoxy and viewed as nothing more than taxes they strenuously oppose.

Senate Majority Leader Mitch McConnell said earlier this week that “there is not much support in my conference for tariffs, that’s for sure”.

At a lengthy closed-door lunch meeting at the Capitol, senators took turns warning Trump officials there could be trouble if the GOP-held Senate votes on disapproving the tariffs. Congressional rejection would be a stiff rebuke to Trump, even more forceful than an earlier effort to prevent him from shifting money to build his long-promised border wall with Mexico.

“Deep concern and resistance,” is how Sen Ted Cruz of Texas characterised the mood. “I will yield to nobody in passion and seriousness and commitment to securing the border, but there’s no reason for Texas farmers and ranchers and manufacturers and small businesses to pay the price of massive new taxes.”

Ron Johnson of Wisconsin, who was among the senators who spoke up, said, “I think the administration has to be concerned about another vote of disapproval. I’m not the only one saying it.”

The outcome would be uncertain – Trump could try to veto a disapproval resolution as he did before. But many Republicans who voted against Trump earlier this year actually supported his ultimate goal of building the border wall. They were just uneasy with his executive reach to do it. Now, the president doesn’t have anywhere near the same backing for the tariffs.

The GOP opposition is grounded in fears over what Trump’s tariffs would do to the livelihoods of ordinary Americans. Senators worry they would spike US consumers’ costs, harm the economy and imperil a major pending US-Mexico-Canada trade deal.