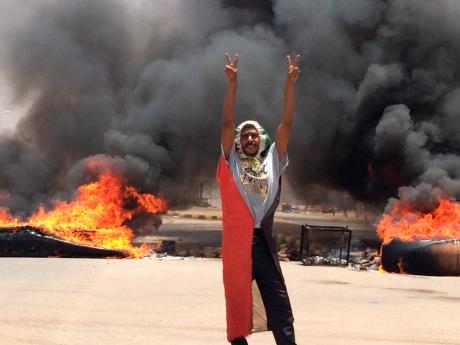 The Associated Press
A protester flashes the victory sign in front of burning tires and debris on Road 60, near Khartoum’s army headquarters, in Khartoum, Sudan, on Monday, June 3. Sudanese protest leaders say at least 13 people have been killed on Monday in the military’s assault on the sit-in outside the military headquarters. The protesters have announced that they are suspending talks with the military regarding the creation of a transitional government.

Sudanese protest leaders dismissed a call yesterday for talks with the ruling generals, saying the military cannot be serious about negotiations while troops keep shooting and killing protesters. The military’s violent crackdown has already claimed 60 lives this week.

A spokesman for the protesters said they would instead continue their pro-democracy campaign to pressure the military to hand over power to a civilian authority.

The head of the military council, General Abdel-Fattah Burhan, had said that the generals were ready to resume negotiations and that there would be “no restrictions” in talks with the leaders behind the months-long street protests.

“We open our hands to negotiations with all parties ... for the interest of the nation,” Burhan said, adding that those responsible for the violent break-up of the demonstrators’ sit-in in the capital, Khartoum, would be held accountable.

The motives for Burhan’s about-face – if sincere – were not immediately clear. Burhan had earlier cut the negotiations and cancelled all agreed-on points between the military and the Forces for Declaration of Freedom and Change, an alliance which represents the protesters.

Mohammed Yousef al-Mustafa, a spokesman for the Sudanese Professionals Association, which is also part of the alliance and which is leading the demonstrations, said the protesters “totally reject” Burhan’s call.

“This call is not serious,” al-Mustafa told The Associated Press. “Burhan and those under him have killed the Sudanese and are still doing it. Their vehicles patrol the streets, firing at people.

“We will continue in our protests, resistance, strike and total civil disobedience,” he added.

Meanwhile, the death toll in the military’s crackdown reached 60 on Wednesday, organisers said. The mounting casualties are the latest challenge to the protest movement, which now aims to show it can keep up pressure in the streets after its central rallying point – the weeks-long sit-in outside the military headquarters in Khartoum – was wiped out on Monday.

In April, the movement succeeded in forcing the military to remove Sudan’s longtime strongman, Omar al-Bashir. It then kept its sit-in going, demanding that the generals who took power hand over authority to civilians.