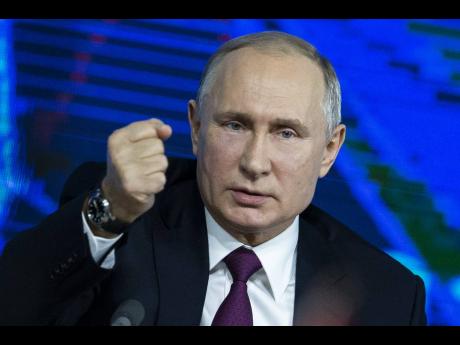 Russian President Vladimir Putin yesterday reaffirmed his staunch denial that his government meddled in the 2016 US presidential election despite the extensive evidence to the contrary, and insisted Moscow has no intention of interfering in any future votes, either.

Speaking in response to a question from The Associated Press during a meeting with chief executives of international news agencies in St Petersburg, the Russian leader said that “we didn’t meddle, we aren’t meddling and we will not meddle in any elections”.

Putin and other Russian officials have hotly denied any interference with the US vote to help Donald Trump win the presidency, even though US Special Counsel Robert Mueller has uncovered evidence of a Kremlin operation to interfere with the 2016 vote. He charged 12 Russian military intelligence officers with breaking into Democratic Party emails, and also indicted other Russians who used phony social media accounts to spread divisive rhetoric and to undermine the US political system.

Putin insisted that “we don’t have and never had any plans to interfere in US domestic politics,” but added that the Russian government can’t stop private citizens from expressing their views about developments in the US online.

“How can we ban them from doing that?” he said. “Do you have such a ban with regard to Russia?”

The president added that Russia had offered to agree on a set of rules regarding modern communications to President Barack Obama’s administration and then Trump’s White House, but neither was ready to make the deal.

During his meeting, Putin also warned that the US’s reluctance to start talks on extending a key arms-control pact raises the threat of an uncontrollable arms race, and said that Moscow has no plans to send troops to shore up Venezuela’s embattled leader.