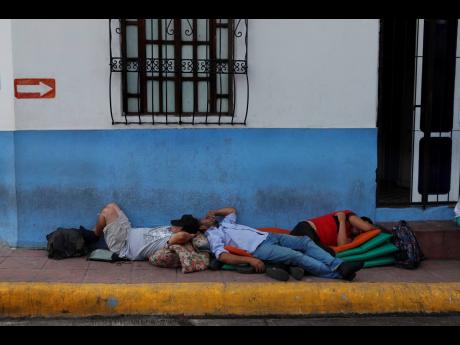 The Associated Press
Migrants sleep on a sidewalk in Tapachula, Chiapas state, Mexico, on Saturday.

As Washington and Mexico City both took victory laps Saturday over a deal that headed off threatened tariffs on Mexican imports, it remained to be seen how effective it may be, and migration experts raised concerns over what it could mean for people fleeing poverty and violence in Central America.

Other than a vague reiteration of a joint commitment to promote development, security and growth in Central America, the agreement focuses almost exclusively on enforcement and says little about the root causes driving the surge in migrants seen in recent months.

“My sense is, overall, the Mexican government got out of this better than they thought. The agreement, though, leaves a lot of big question marks,” said Andrew Selee, president of the Migration Policy Institute. “It’s good that the two sides reached an agreement which allows both of them to save face, but it’s not clear how easy it is to implement.”

The deployment of 6,000 National Guard troops appears to be the key commitment in what was described as “unprecedented steps” by Mexico to ramp up enforcement, though Interior Secretary Olga Sánchez Cordero said that had already been planned and was not a result of external pressure.

Mexico was already increasing enforcement such as detentions, deportations and checkpoints. In recent weeks it broke up the latest migrant caravan, snuffing out most appetite for travelling in large, visible groups.

If Mexico does more as promised, it’s likely to be seen in intensifications of those same efforts, experts said — raids on hotels where migrants stay or on bus companies transporting them north to the US border. The two countries also agreed to collaborate to share information on and disrupt people-smuggling networks, a new focus seen earlier this week when Mexico arrested two migration activists and froze accounts of over two dozen people alleged to have organised caravans.

Observers said a concern is that even more aggressive enforcement could put migrants with legitimate asylum claims at risk of being deported from Mexico to the dangers they fled in the first place. Also, Mexican security forces are known for often being corrupt and shaking migrants down for bribes. A renewed crackdown is seen as making migration through Mexico more difficult and more dangerous, but doing little to discourage Central Americans desperate to escape poverty, hunger and violence.