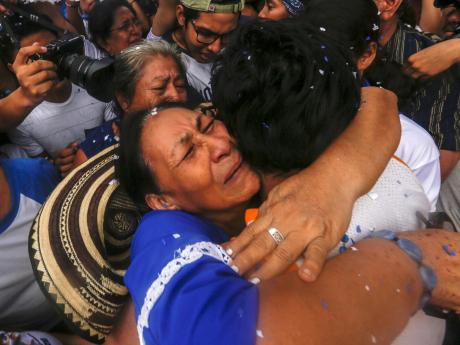 Yubrank Suazo is embraced by his mother Ana Julia Urbina after being freed from prison, in Masaya, Nicaragua. Suazo's release comes amid a broader move to set free people the opposition considers political prisoners under an agreement meant to ease the country's political standoff - AP Photo

MANAGUA, Nicaragua (AP) —
Principal leaders of protests against President Daniel Ortega's government and two prominent journalists were freed from prison before dawn Tuesday ahead of a June 18 deadline to release the last of hundreds of people the opposition considers political prisoners.

Neighbours and friends gathered to greet the newly freed activists with Nicaraguan flags, blue and white balloons and cheers.

Carcache "is very strong, came out very positive, is going to continue in the struggle and will not rest until he sees the dictatorship out" of power, said Ángel Rocha, a student who went to see the released youth.

The releases came amid a broader move to set free, people detained since last year for their role in the protests under an agreement meant to ease the country's political standoff.

The government has been gradually releasing prisoners since dialogue between the two sides reopened in February, though those talks later stalled with little progress on reaching agreement, in part over opposition demands that all jailed government opponents be freed and cleared of charges.

Authorities said in a statement that 56 people were freed Tuesday and that the International Committee of the Red Cross accompanied them to their homes.