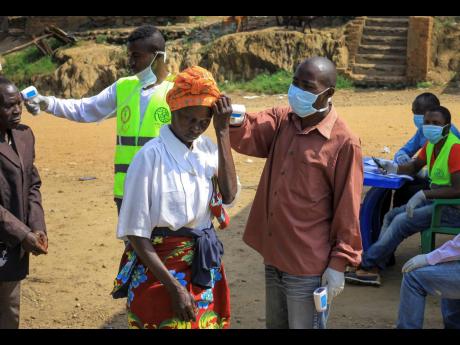 The Associated Press
People crossing the border have their temperature taken to check for symptoms of Ebola, at the border crossing near Kasindi, eastern Congo Wednesday, June 12, 2019, just across from the Ugandan town of Bwera. In Uganda, a 5-year-old boy vomiting blood became the first cross-border victim of Ebola in the current outbreak on Wednesday, while two more people in Uganda tested positive for the highly contagious disease that has killed nearly 1,400 in Congo. (AP Photo/Al-hadji Kudra Maliro)

A five-year-old boy vomiting blood became the first cross-border victim of Ebola in the current outbreak on Wednesday, while two more people in Uganda tested positive for the highly contagious disease that has killed nearly 1,400 in Congo.

The boy, part of a Congolese family who crossed into Uganda earlier in the week, died overnight, the World Health Organization (WHO) said. Ugandan authorities said the two new cases are his three-year-old brother and 50-year-old grandmother, who have been isolated at a hospital near the border. Uganda now has three confirmed Ebola cases.

Authorities tried to determine how the family, exposed to the virus via a sick relative in Congo, managed to cross a border where health officials have been screening millions of travellers for months.

This has become the second-deadliest Ebola outbreak in history since the first cases were declared in August. A WHO expert committee has been alerted for a possible meeting on whether to declare a global health emergency now that the outbreak has crossed the border, a spokesman said.

Experts have long feared Ebola could spread to neighbouring countries because of rebel attacks and community resistance hampering virus containment work in eastern Congo, one of the world’s most turbulent regions. The virus can spread quickly via close contact with bodily fluids of those infected and can be fatal in up to 90 per cent of cases.

Congo’s health ministry said a dozen members of the boy’s family had showed symptoms of Ebola. They were not placed in isolation and instead were told to remain where they were staying until transport was found to an Ebola treatment unit in Beni, Dr Dominique Kabongo, coordinator of Ebola response teams in Kasindi, told The Associated Press.

Instead, half of the family quietly crossed into Uganda, while five of those who remained have tested positive for Ebola since being taken to Beni, the health ministry said.

“Many people are evading (border) customs and using small footpaths and it is difficult for us to follow the contacts,” Kabongo said.

In Uganda, where authorities had been alerted by Congolese colleagues, the boy received treatment while relatives were isolated and tested. The boy’s uncle is now among seven suspected Ebola cases in Uganda, Health Minister Jane Aceng said, adding that authorities on both sides of the border would do their best to close unauthorised crossings.

Congolese officials were waiting to take sick patients back to Congo for treatment with their consent.