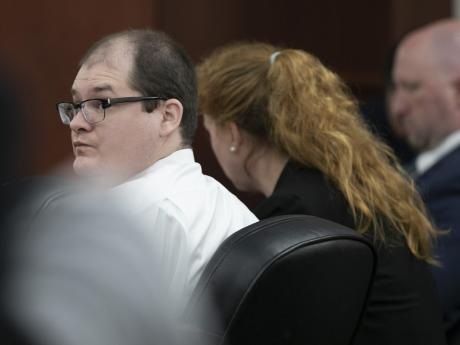 Timothy Jones Jr. looks around the courtroom during closing arguments of his trial in Lexington, S.C. on Thursday, June 13, 2019. Jones, Jr. was found guilty of killing his five young children in 2014. (Tracy Glantz/The State via AP, Pool)

COLUMBIA, S.C. (AP) — A South Carolina father was sentenced to death Thursday for killing his five children with his own hands.

After they were dead, he drove around with their bodies for nine days before dumping them in garbage bags on the side of an Alabama dirt road.

Timothy Jones Jr. showed no emotion as the jury delivered the verdict after less than two hours of deliberation.

They also could have sentenced him to life without parole.

The same Lexington County jury convicted Jones of five counts of murder last week in the deaths of his children, ages 1 to 8, in their Lexington home in August 2014.

Prosecutors pushed for a death sentence.

Solicitor Rock Hubbard told jurors in his closing argument earlier Thursday that if any jurors had doubts whether Jones deserved the death penalty, all they had to do is consider the five garbage bags where he dumped their bodies in rural Alabama.

But a lawyer for Jones told jurors they alone could show mercy — if not for a father who killed five kids with his own hands, then for a family that has seen so much death and still wants to love Jones, even through prison bars.

Jones’ father hung his head in his hands as the verdict was read and other family members appeared to cry.

Jones is just the second person to be sent to South Carolina’s death row in five years.

The state has not executed anyone since 2011 and lacks the drugs to carry out lethal injection.