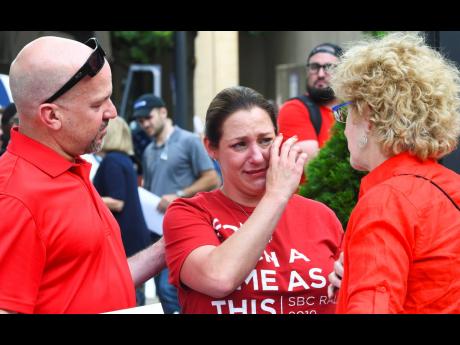 The Associated Press
Jules Woodson (centre) of Colorado Springs, Colorado, is comforted by her boyfriend Ben Smith (left) and Christa Brown while demonstrating outside the Southern Baptist Convention’s annual meeting on Tuesday, June 11, in Birmingham, Alabama. First-time attendee Woodson spoke through tears as she described being abused sexually by a Southern Baptist minister.

Sharing a stage with tearful survivors of sex abuse, the president of the Southern Baptist Convention (SBC) apologised on Wednesday for the abuse crisis besetting his denomination and outlined an array of steps to address it.

“We are broken-hearted and angry,” said the Rev J.D. Greear as the largest US protestant denomination neared the end of its two-day national meeting. “Give us the courage to make the changes that genuine repentance requires.”

In an impassioned speech, preceded by prayers of lamentation, Greear blamed the crisis on years of cover-ups. He praised a new anti-abuse curriculum being offered to all SBC churches and seminaries, and he said the SBC must do better in screening potential pastors.

“Father, forgive us,” he prayed, after calling out a litany of sins.

The Rev Russell Moore, head of the SBC’s public policy arm, said the abuse crisis is a result of satanic forces at work in the church.

“The vital question is, what we will do next?” Moore said during an address.

Moments earlier, dozens of abuse victims and supporters stood during a prayer for survivors of sexual misconduct. Some wept openly.

Abuse survivor Stephanie Davis stood onstage and received a standing ovation after a video presentation in which she recounted her experience. Davis said she was abused as a teen by a music minister who went on to seminary and kept working in churches until last year. “No one ever told me it wasn’t my fault,” she said.

“We have to get this right,” she said in the video, urging the church to stand with victims and to hold abusers accountable.