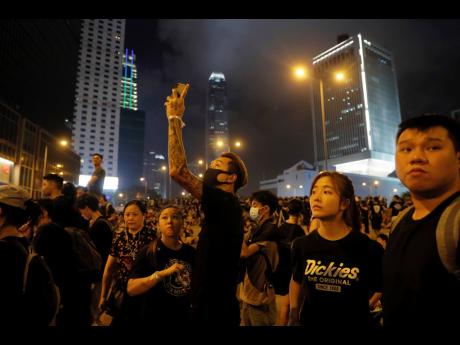 AP
Protesters gather into the night against an unpopular extradition bill in Hong Kong yesterday. Hong Kong citizens marched for hours in a massive protest that drew a late-in-the-day apology from the city’s top leader for her handling of legislation that has stoked fears of expanding control from Beijing in this former British colony.

Citizens marched for hours yesterday in a massive protest that drew a late-in-the-day apology from the city’s top leader for her handling of legislation that has stoked fears of expanding control from Beijing in this former British colony.

Nearly two million of the city’s seven million people turned out, according to estimates by protest organisers. Police said 338,000 were counted on the designated protest route in the ‘peak period’ of the march. A week earlier, as many as one million people demonstrated to voice their concern over Hong Kong’s relations with mainland China in one of the toughest tests of the territory’s special status since Beijing took control in a 1997 handover.

Well after dark, crowds gathered outside the police headquarters and Chief Executive Carrie Lam’s office. On Saturday, Lam suspended her effort to force the passage of the bill, which would allow some suspects to be sent for trial in mainland China.

The move did not appease Hong Kong residents, who see it as one of many steps chipping away at Hong Kong’s freedoms and legal autonomy. Opponents worry that the law could be used to send criminal suspects to China to potentially face vague political charges, possible torture and unfair trials.

Protesters are also angered over the forceful tactics by police in quelling unrest at a demonstration on Wednesday.

Periodically, the shouts of the protesters standing shoulder to shoulder in front of the police headquarters would crescendo into a roar that reverberated through the narrow concrete canyons of the red-light district of Wanchai.

In a statement issued late yesterday, Lam noted the demonstrations and said the government “understands that these views have been made out of love and care for Hong Kong.

“The chief executive apologises to the people of Hong Kong for this and pledges to adopt a most sincere and humble attitude to accept criticisms and make improvements in serving the public,” it said.

Not enough, said the pro-democracy activists.

“This is a total insult to and fooling the people who took to the street!” the Civil Human Rights Front said in a statement.

The marchers want Lam to scrap the extradition bill, which is supported by the communist leadership in Beijing, and to resign.