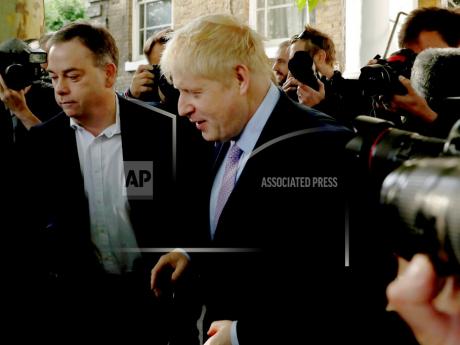 AP
British Conservative party leadership contender Boris Johnson gets in a car as he leaves his home in south London, today.

LONDON (AP) — The Latest on the voting to elect Britain's next prime minister (all times local):

Boris Johnson has increased his lead in the race to become Britain's next prime minister, as one of his rivals was eliminated from the contest.

Five contenders in all were still in the running after a second-round ballot of Conservative lawmakers on Tuesday.

Former Brexit Secretary Dominic Raab failed to reach the threshold of 33 votes needed to go on to the next round.

Tory lawmakers will vote again Wednesday and, if needed, on Thursday. The final two contenders will go to a by-mail ballot of all 160,000 Conservative Party members nationwide.

The winner will replace Theresa May as party leader and prime minister.

Conservative lawmakers in Britain are voting on who should become the party's next leader and Britain's next prime minister.

Six contenders, including front-runner Boris Johnson, remained before the vote on Tuesday. At least one will be eliminated in that vote.

All those aiming to replace Prime Minister Theresa May vow they will succeed where May failed and lead Britain out of the European Union, though they differ about how they plan to break the country's Brexit deadlock.

Johnson, a former foreign secretary, gained backing from 114 of the 313 Tory legislators in the first round of voting.

In Tuesday's vote, the lowest-placed contender will drop out, along with any who fail to get at least 33 votes. Further rounds of voting are set for Wednesday and Thursday if needed. The final two contenders will go to a postal ballot of about 160,000 Conservative Party members nationwide.

The winner, due to be announced in late July, will become party leader and prime minister.