Four charged in downing of Malaysian airliner over Ukraine 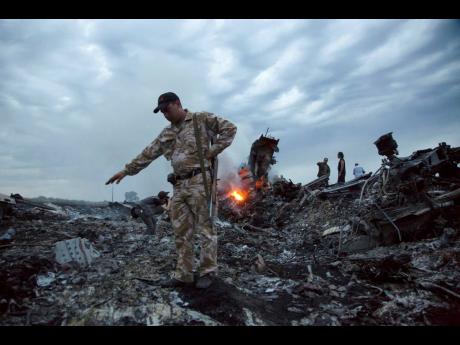 The Associated Press
In this July 17, 2014 file photo, people walk among the debris at the crash site of a passenger plane near the village of Grabovo, Ukraine.

International prosecutors announced murder charges Wednesday against four men – three of them Russians with military or intelligence backgrounds – in the missile attack that blew a Malaysia Airlines jet out of the sky over Ukraine five years ago, killing all 298 people aboard.

The case, built with the help of wiretaps, radar images and social media posts, marks the most significant step yet towards tying the tragedy to Moscow, which has backed the pro-Russian separatists fighting to seize control of eastern Ukraine.

In announcing the charges, prosecutors appealed for witnesses to help lead them even further up the chain of command in President Vladimir Putin’s Russia.

Investigators “want to go as far as we can get” because “it’s important to know who can be held responsible for this absolute tragedy,” top Dutch prosecutor Fred Westerbeke said.

The trial for the defendants, who also include a Ukrainian separatist fighter, was set for next March in the Netherlands, though it appeared unlikely any of them would be brought before the court, since Russia and Ukraine forbid the extradition of their citizens.

Russia’s Foreign Ministry dismissed the charges against the Russian citizens as “absolutely unfounded” and accused the investigators of using “dubious sources of information” and ignoring evidence provided by Moscow in order to discredit Russia.

It said, too, that the international team turned a blind eye to Ukraine’s failure to close its airspace to commercial flights, despite the fighting that endangered aircraft.

Malaysia Airlines Flight 17 from Amsterdam to Kuala Lumpur was brought down on July 17, 2014, over eastern Ukraine by what investigators said was a Buk missile from a Russian anti-aircraft unit. Investigators believe the Ukrainian rebels probably mistook the Boeing 777 passenger jet for a Ukrainian military plane.

Russia has repeatedly denied involvement in the attack, but eastern Ukraine’s pro-Moscow rebels have relied heavily on Russian military assistance during the separatist conflict that erupted in April 2014 and has claimed more than 13,000 lives.

Associated Press reporters spotted a Buk, an unusually big and sophisticated type of weapon, in the Ukrainian town of Snizhne just hours before the jetliner was shot down, raining debris and bodies down on to farms and sunflower fields.