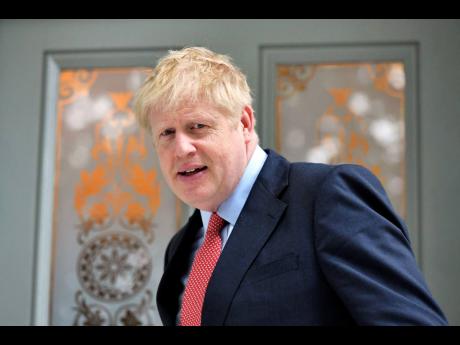 The Associated Press
Britain’s Conservative Party leadership contender Boris Johnson leaves his home in south London, Wednesday June 19, 2019. Former Foreign Secretary Boris Johnson increased his lead in the race to become Britain’s next prime minister Tuesday in a Conservative Party vote that eliminated one of his rivals and enabled upstart candidate Rory Stewart to defy expectations by remaining in the contest. (Dominic Lipinski/PA via AP)

Britain’s governing Conservative Party was set to kick one more candidate out of the contest to become the country’s next prime minister as contenders scrambled Wednesday to catch front-runner Boris Johnson.

Johnson, a former London mayor and UK foreign secretary, had a big lead after two previous rounds of voting by Conservative lawmakers. Many fellow Brexit supporters in Parliament have rallied behind his insistence that Britain must leave the European Union as scheduled on October 31.

The five-strong field will be narrowed in another elimination round today and further winnowed tomorrow. The two candidates with the most votes will appear on a run-off ballot mailed to about 160,000 party members across the country.

The winner, expected to be announced in late July, will replace Theresa May as party leader and prime minister. May stepped down as Conservative leader earlier this month after failing to secure Parliament’s approval for her Brexit deal.

Johnson is all but guaranteed to be one of the two finalists. He won 126 of the 313 votes cast on Tuesday, and yesterday won the backing of ex-Brexit Secretary Dominic Raab, who was eliminated from the race the day before.

“Boris will make sure we leave the EU on time,” Raab said.

International Development Secretary Rory Stewart, who began the contest as a rank outsider but built momentum with calls for realism and compromise on Brexit, said he was talking to Environment Secretary Michael Gove about combining forces.

He said the question is “who is best able to politely and respectfully defeat Boris Johnson”.

The five candidates to replace May have all vowed to succeed where she failed and lead the country out of the EU. They differ widely on how to do that – and critics say none of their plans is realistic.