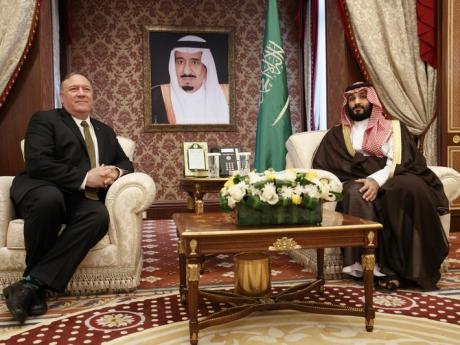 DUBAI, United Arab Emirates (AP) — U.S. Secretary of State Mike Pompeo held talks Monday with the Saudi king and crown prince after days of mounting tensions following the downing of a U.S drone last week and after President Donald Trump pulled back from the brink of retaliatory military strikes on Iran.

The U.S. denies the drone, valued at more than $100 million, violated Iranian airspace.

Trump said he backed away from planned strikes after learning that 150 people would be killed but that military action remained an option.

On Monday, Pompeo held separate talks with King Salman and Crown Prince Mohammed bin Salman in the Saudi port city of Jiddah to discuss the escalation with Iran.

Pompeo wrote on Twitter that he had a “productive meeting” with King Salman and discussed “heightened tensions in the region and the need to promote maritime security” in the Strait of Hormuz near the Persian Gulf, through which roughly a fifth of the world’s traded oil passes.

From the kingdom, Pompeo will travel to neighbouring United Arab Emirates, another close U.S. ally.

The regional stops, made on his way to India, may be aimed at reassuring Washington’s Sunni Gulf Arab allies that the White House remains committed to maintaining pressure on Shiite Iran following Trump’s last-minute about face, which likely raised questions about U.S. willingness to use force against the Islamic Republic.