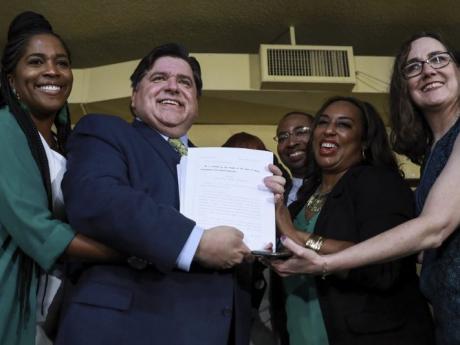 Governor J. B. Pritzker holds a bill that legalises adult-use cannabis in the state of Illinois Tuesday, June 25, 2019, at Sankofa Cultural Arts and Business Center in Chicago. Illinois becomes the 11th to legalize the adult-use of recreational marijuana. (AP Photo/Amr Alfiky)

SPRINGFIELD, Ill. (AP) — Illinois’ new governor delivered on a top campaign promise Tuesday by signing legislation making the state the 11th to approve marijuana for recreational use in a program offering legal remedies and economic benefits to minorities whose lives critics say were damaged by a wayward war on drugs.

Legalisation in Illinois also means that nearly 800,000 people with criminal records for purchasing or possessing 30 grams of marijuana or less may have those records expunged, a provision minority lawmakers and interest groups demanded.

It also gives cannabis-vendor preference to minority owners and promises 25% of tax revenue from marijuana sales to redevelop impoverished communities.

“Today, we’re hitting the ‘reset’ button on the war on drugs,” Cassidy said.

Residents may purchase and possess up to 1 ounce (30 grams) of marijuana at a time. Non-residents may have 15 grams.

The law provides for cannabis purchases by adults 21 and older at approved dispensaries, which, after they’re licensed and established, may start selling January 1, 2020.

Possession remains a crime until January 1, a spokesman for Senate Democrats said.