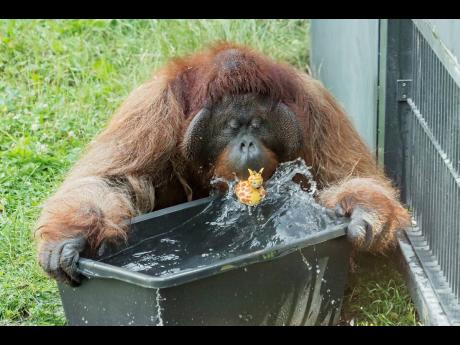 The Associated Press
An orangutan plays with water at the zoo Schoenbrunn in Vienna, Austria, on Tuesday, June 25. Europe is facing a heatwave with temperatures up to 40 degrees. 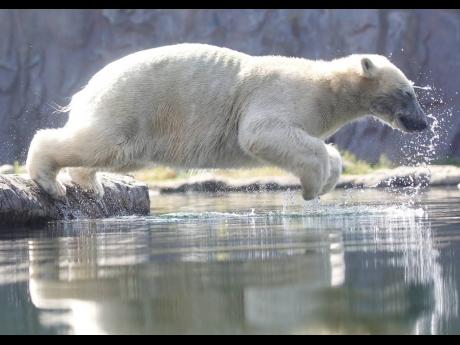 The Associated Press
Polar bear Nanook jumps into the water at the zoo in Gelsenkirchen, Germany, on June 25. Germany faces a heatwave with temperatures up to 40 degrees Celsius. 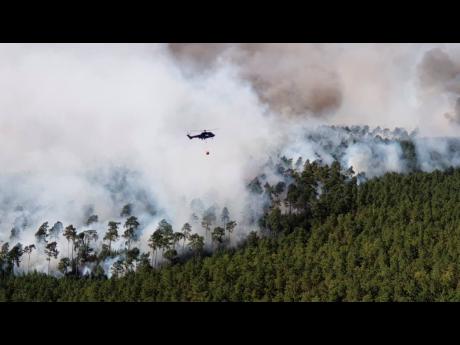 The Associated Press
A helicopter of the German Federal Police is fighting fire at a forest near Dahme-Spreewald, south of Berlin, on Monday, June 24. Germany expects the hottest days of the year so far during this week. 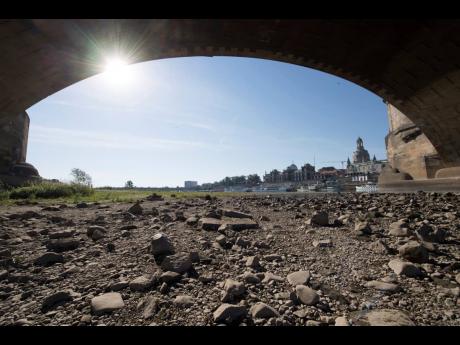 The Associated Press
The banks of the river Elbe in Dresden, Germany, are seen running dry on a hot Tuesday, June 25. Germany expects the hottest day of the year so far. 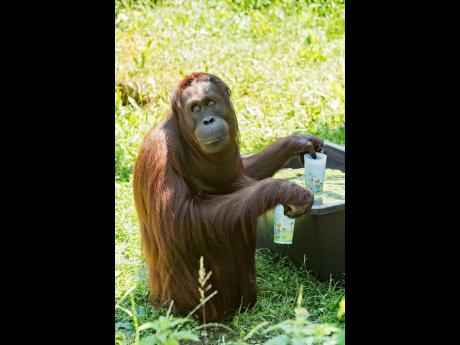 The Associated Press
HANDOUT - An orang-utan fills his cups with water at the zoo Schoenbrunn in Vienna, Austria, Tuesday, June 25, 2019. Europe is facing a heatwave with temperatures up to 40 degrees. (Daniel Zupanc/Vienna Zoo via AP) 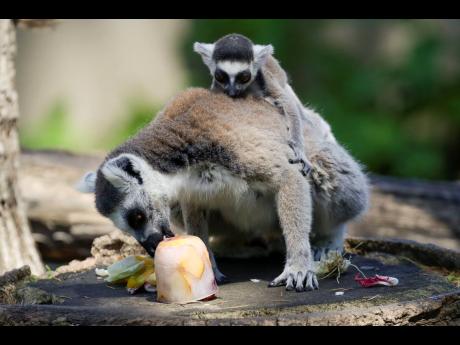 The Associated Press
A lemur with a baby on its back sucks on a fruit icicle on a hot day, in Rome's zoo, Tuesday, June 25, 2019. Zookeepers at the Bioparco often give animals ice blocks with either fruit or meat inside on hot summer days. (AP Photo/Andrew Medichini) 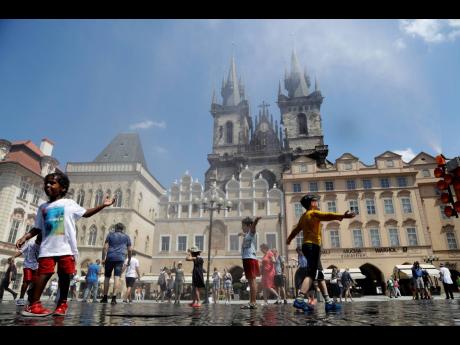 The Associated Press
People cool down under the spray of water during a hot and sunny day at the Old Town Square in Prague, Czech Republic, Tuesday, June 25, 2019. (AP Photo/Petr David Josek)
1
2
3
4
5
6
7

Orangutans at a Vienna zoo got buckets of water, lemurs in Rome enjoyed fruit, icicles and a polar bear took to a pool in Germany as much of Europe sweltered yesterday in an early summer heatwave.

Authorities warned that temperatures could top 40 degrees Celsius (104º Fahrenheit) in some parts of the continent over the coming days, the effect of hot air moving northwards from Africa.

French Health Minister Agnes Buzyn said more than half of France is on alert for high temperatures Tuesday, and the hot weather is expected to last until the end of the week.

“Heatwaves are going to happen again, we know it, and maybe intensify in the next years and decades because of the climate change,” she told reporters following the government’s weekly Cabinet meeting.

France is still haunted by the experience of a 2003 heatwave that killed an estimated 15,000 elderly in the country. The government has since put in place numerous prevention measures, including having local city halls contact fragile people and possibly visit them to make sure they’re coping.

Meanwhile, public service announcements on TV and in the Metro urged people to drink water and keep an eye out for isolated older neighbours.

The message was echoed by the Red Cross federation’s regional health coordinator for Europe.

“The coming days will be challenging for a lot of people, but especially older people, young children, and people with underlying illnesses or limited mobility,” said Dr Davron Mukhamadiev.

“Our message this week is simple: look after yourself, your family and your neighbours,” he said. “A phone call or a knock on the door could save a life.”

Paris Mayor Anne Hidalgo predicted heatwaves like the one now sizzling Paris, expected to last about a week, “could last one, two, three months” if global warming continues unchecked.

Mobile teams are on the streets to provide water to the homeless. In the northern French city of Calais, regional authorities have provided 1,000 drums of water for migrants gathered there.

Authorities in Switzerland raised the heat warning to the second-highest level for areas along the southern and northern borders with Italy and Germany, warning people to avoid strenuous activity and stay hydrated.