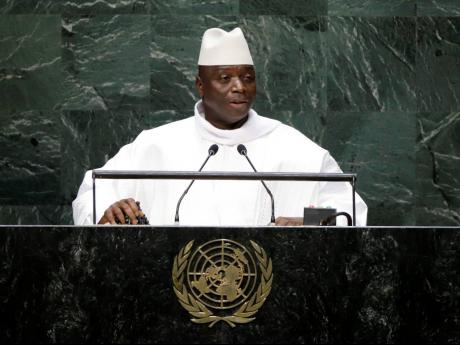 A Gambian beauty pageant winner has accused the country’s former dictator Yahya Jammeh of raping her four years ago, the latest allegation of human rights abuses committed by the ex-president now living in exile in Equatorial Guinea.

Fatou ‘Toufah’ Jallow, now 23, made an announcement to journalists Tuesday and said she plans to testify later this year before Gambia’s truth and reconciliation commission, which is investigating abuses committed under the Jammeh regime.

The dictator of 22 years is accused of ordering opponents tortured, jailed and killed. The sexual abuse allegations raised by Jallow and others directly implicate him in personally committing violence against Gambians.

Jallow and other young women interviewed by Human Rights Watch say the president was a sexual predator who coerced young women into sexual relationships by promising scholarships and even putting some on the state payroll.

Jammeh is reportedly living a lavish but reclusive life in exile in Equatorial Guinea, where he is protected from extradition by the dictator in charge of the oil-rich country.

Jallow, who wanted to come forward publicly, said the president began lavishing gifts on her and her family after meeting her when she was crowned queen of the Miss July 22 Pageant as an 18-year-old back in 2014.

Jammeh took a special interest in her, she said, ordering the utility company to install running water at her mother’s home, and having his cousin purchase the family expensive furniture.

While initially he expressed interest in funding her charity project, she said that Jammeh later asked for her hand in marriage. After she declined, he told her that as the pageant winner she had to attend an event at his official residence, State House, ahead of the holy month of Ramadan.

Once there, she said she was locked in a room and drugged by the president himself.

“He told me, ‘No woman has ever rejected me. And who do you think you are?’” she said. “His face changed, his eyes were so red, different from the man before. He said, ‘No woman rejects me. You think you can get away with it?’”

As she tried to leave, Jallow said the president told her: “If you make any move, I will kill you with my own hands.”

The president then drugged her, shoved his genitals in her face and raped her before she blacked out, she said. Several days later she told her family she was going to the market to shop, and then fled to neighbouring Senegal.

Jammeh later lost the 2016 election to now President Adama Barrow. After initially refusing to accept his defeat, Jammeh succumbed to international pressure, stepped down from office and fled to Equatorial Guinea. Gambia’s new administration has estimated that Jammeh and his associates stole up to $1 billion in funds from the state coffers.

The truth and reconciliation commission does not have the powers to prosecute, but will make recommendations for the Attorney General Chambers to act on a number of cases that may be taken up with the court. Jammeh, for now, remains untouchable in exile.

“It’s going to take a lot of heavy political lifting to pry him out of Equatorial Guinea,” said Reed Brody, counsel at Human Rights Watch who led the investigation into the allegations of sexual abuse.

Jallow, who later received asylum in Canada, says she is undergoing therapy and hopes other young women victimised by Jammeh will come forward.

“Nobody discusses rape and yes, I am scared,” she said. “I am scared. But I want the next person after me to be a little less scared than me.”