Europe sets heat records as much of continent sizzles 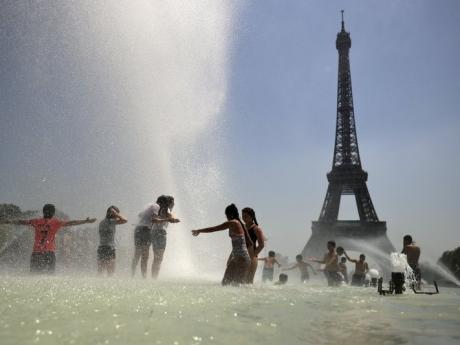 Youngsters cool off at the Trocadero public fountain in Paris, Wednesday, June 26, 2019. High temperatures are expected to go up to 39 degrees Celsius (102 Fahrenheit) in the Paris area later this week and bake much of the country, from the Pyrenees in the southwest to the German border in the northeast. (AP Photo/Francisco Seco)

BERLIN (AP) — Torrid weather gripped large parts of western and central Europe on Wednesday, setting new June temperature records in Germany and the Czech Republic and forcing drivers to slow down on some sections of the famously speedy German autobahns.

Authorities imposed speed limits on some autobahns due to concerns the high heat would cause expressway surfaces to buckle.

Some French schools stayed closed as a precaution due to worrying hot weather.

German weather agency Deutscher Wetterdienst said a preliminary reading showed the mercury reached 38.6 degrees Celsius (101.5 F) in Coschen, near the Polish border. That’s a tenth of a degree higher than the previous national record for June, set in 1947 in southwestern Germany.

The Czech Hydro-Meteorological Institute said the temperature reached 38.5 Celsius (101.3 F) in Doksany — a Czech Republic high for the month. New daily records were set at some 80% of local measuring stations.

And it’s about to get even hotter.

Authorities have warned that temperatures could top 40 degrees Celsius (104 F) in parts of continental Europe in the coming days as a plume of dry, hot air moves north from Africa.

The transport ministry in Germany’s eastern Saxony-Anhalt state said it has imposed speed limits of 100 kph or 120 kph (62 mph or 75 mph) on several short stretches of highway until further notice.

Those stretches usually don’t have speed limits, but officials worry they could crack in the heat and endanger drivers.