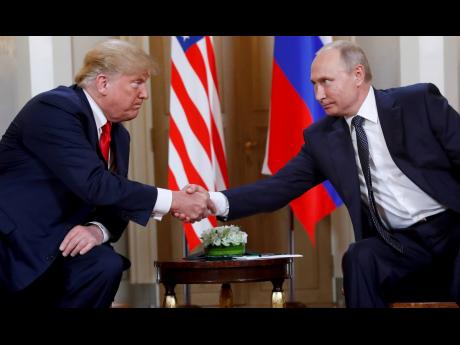 The Associated Press
In this July 16, 2018, file photo, US President Donald Trump (left), and Russian President Vladimir Putin shake hands at the beginning of a meeting at the Presidential Palace in Helsinki, Finland.

Russian President Vladimir Putin will meet with US President Donald Trump on the sidelines of an international summit in Japan, the Kremlin said Wednesday, in talks that come amid bitter differences between Moscow and Washington.

Trump has said he plans to meet with Putin during the Group of 20 summit in Osaka, and Putin has said he welcomes dialogue and is ready to sit down for talks. Wednesday’s statement by Putin’s foreign affairs adviser, Yuri Ushakov, marked the official Kremlin confirmation of the two presidents’ meeting on Friday.

Ushakov said the meeting is set to last about an hour, though it will be up to the presidents to decide. He added that the talks are expected to touch on arms-control issues and international crises, including the Iranian nuclear deal, Syria, North Korea and Ukraine.

“Russia and the United States can work together efficiently on the basis of equality and mutual respect,” Ushakov said, adding that the Kremlin “stands for developing Russian-US relations in a constructive and businesslike way”.

Russia-US ties have sunk to their lowest level since the Cold War over the crisis in Ukraine, the war in Syria, and Russian meddling in the 2016 US presidential election.

Putin has denied that Russia has meddled in the vote to help Trump win, even though US special counsel Robert Mueller has uncovered extensive evidence to the contrary.

Putin and Trump have met on the sidelines of several international meetings, most recently at the G-20 summit in Buenos Aires last fall. They also had a full-fledged summit in Helsinki, Finland, last July, after which Trump had faced fierce criticism at home for accepting Putin’s denial of meddling in the US vote.

New rounds of anti-Russia sanctions followed the Helsinki meeting, and Trump has announced the withdrawal from a key arms-control pact signed in 1987 with the then Soviet Union. Putin followed suit. The Intermediate-Range Nuclear Forces Treaty is set to terminate this summer, raising fears of a new arms race.

Another major nuclear pact – the New Start treaty that entered force in 2012 – is set to expire in 2021 unless Moscow and Washington negotiate an extension.

Ushakov said that both arms treaties are expected to be on the agenda of Friday’s meeting.

Fyodor Lukyanov, the chairman of the Council for Foreign and Defense Policies, an influential group of Russian foreign policy experts, said that the past meetings of the two presidents have fuelled more infighting in the US and further clouded ties between Moscow and Washington.

“All that has led to nothing, and the US has shown an utter lack of respect” that has made Kremlin realise that a rapprochement is elusive, Lukyanov said. “Making a bargain with Trump is a myth. Trump acts in a tough environment that makes any serious deals unlikely.”