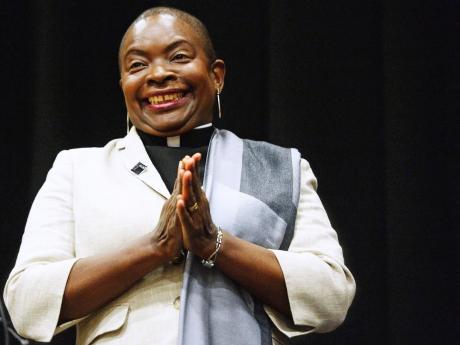 Jamaica-born Rose Hudson-Wilkin has been appointed as the Church of England’s first black female bishop.

The UK Guardian is reporting that Hudson-Wilkin, the chaplain to the Speaker of the House of Commons, was announced as the new bishop of Dover.

Hudson-Wilkin was introduced by Justin Welby, the archbishop of Canterbury, at St George’s Church of England school in Broadstairs, Kent.

He described her appointment as “groundbreaking and historic” and said it was one of the most exciting appointments the church had made for a long time.

Hudson-Wilkin said she saw herself as “pretty ordinary – not necessarily ‘the black priest’ – but a priest with the good fortune to be black.”

Her appointment as bishop felt like a miracle, she said.

Since the age of 14, she had an “overwhelming sense of being called to ministry”, at a time when women were barred from the priesthood.

Hudson-Wilkin was raised in Montego Bay by her father and aunt after her mother left to work in the UK.

In 1982, Hudson-Wilkin left Jamaica to train at the Church Army College in the West Midlands.

She was ordained as a priest in 1994, the first year the Church of England allowed female clergy.

Hudson-Wilkin has urged the Church of England to appoint more black and minority ethnic clergy and officials.