Malaysia plans to decriminalise drug use to battle addiction 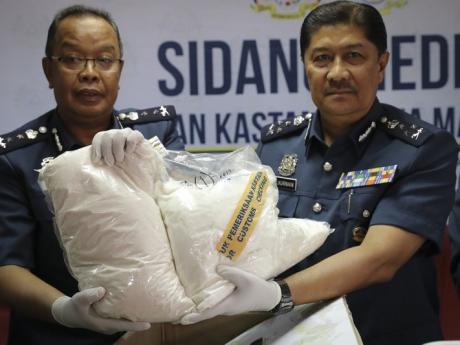 This June 26, 2019, photo shows customs officials display seized drugs at the customs office in Sepang. Malaysia's government has announced plans to remove criminal penalties for the possession and use of drugs in small quantity to battle addiction, but stressed the move is not akin to legalizing drugs. (AP Photo/Vincent Thian)

KUALA LUMPUR, Malaysia (AP) — Malaysia’s government plans to drop criminal penalties for the possession and use of drugs in small quantities to battle addiction, but stressed the move is not akin to legalising narcotics.

Malaysia has one of the world’s harshest penalties for drug possession.

Anyone found with 200 grams (7.05 ounces) of cannabis, one kilogramme (2.2 pounds) of opium, 40 grams (1.41 ounces) of cocaine, and 15 grams (0.53 ounces) of heroin or morphine face being charged with drug trafficking, which carries the death penalty.

More than 1,200 prisoners are on death row, most of them convicted of drug crimes.

Health Minister Dzulkefly Ahmad said in a statement Thursday that the proposal for the decriminalisation of drug addiction will be a significant game changer.

He said drug addiction is a complex, relapsing medical condition and throwing an addict into jail will not cure them.

“Drug decriminalisation will indeed be a critical next step toward achieving a rational drug policy that puts science and public health before punishment and incarceration,” Dzulkefly said.

“An addict shall be treated as a patient, not as a criminal, whose addiction is a disease we would like to cure.”

He said the move mustn't’t be mistaken as legalising drugs as drug trafficking will remain a crime.