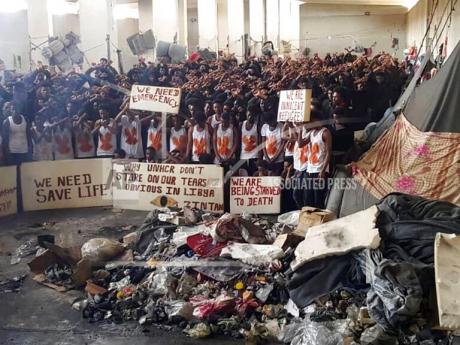 AP
In this May 21, 2019 photo provided by an African migrant, hundreds of migrants stage a protest in a detention center in the town of Zintan, western Libya, appealing for help from the United Nations.

CAIRO (AP) — In the desert of western Libya, hundreds of African migrants were held for months in a hangar filled with maggot-covered garbage and sewage. They shared a couple of buckets of water between them and barely survived on one meal a day. More than 20 died from disease and hunger, they said.

The migrants and their advocates accused U.N. aid agencies of turning a blind eye or responding too slowly to their plight.

The U.N refugee agency, or UNHCR, denies it's been unresponsive, saying it has been unable to access parts of the facility, run by one of Libya's many militias. The commander in charge of the facility denied there was any lack of access.

Internal memos and emails leaked to The Associated Press also show disagreement among the UNHCR and other aid agencies over conditions at the site in the town of Zintan, with one NGO working on behalf of UNHCR denying there was lack of food, even as it acknowledged it hadn't been able to see the majority of migrants held there.

The suffering of the migrants held in Zintan underscores the impact of the European Union's effective yet much-criticised policy of blocking Africans from sailing across the Mediterranean to its shores and keeping them in Libya.

Funded and trained by the EU, Libyan border guards have been stepping up efforts to stop migrants from crossing. As a result, thousands of migrants are trapped in a country thrown into chaos by war. At least 6,000 are locked up in dozens of detention facilities run by militias accused of human rights abuses and torture. Others are held in traffickers' lockups, where they face torture and rape by traffickers seeking ransom money from their families, according to reports from the UN and rights groups.

EU officials say they have dedicated millions of dollars to providing humanitarian aid to migrants and helping them return home, through the UNHCR and other agencies.

The EU said in a statement that it is not ignoring what it described as the "dire" situation of refugees and migrants stranded in Libya. It said it has repeatedly denounced inhumane conditions in detention centres and demanded their closure.

Responding to questions from the AP, the EU said a joint task force with the African Union and the United Nations is seeking safer alternatives outside Libya, including by stepping up evacuations and legal resettlement.

But little has changed in Zintan.

Migrants inside the detention centre who were contacted by the AP accused UNHCR of abandoning them.

"Migrants are appealing for your help to be a voice to the voiceless," one told the AP, addressing U.N. agencies. "We need emergency evacuation from Zintan ... we suffer physically, mentally, and emotionally."

Like others who spoke from the site, he asked not to be named to avoid reprisals from guards.

Around 700 Africans, most from Eritrea, are held at the facility. Until earlier this month, almost all were held in a hangar from which photos and video were posted online and drew media attention. Since then, the migrants say they were moved to two smaller halls, with similarly tough conditions.

While in the hangar, migrants said they were not allowed out to see the sun. Guards gave them one small plate of pasta or couscous a day. Each day, a few were given a few minutes to rush out to a faucet with a couple of buckets, fill them with water and bring them back for the others to drink.

Photos and videos taken by migrants showed heaps of garbage in the hangar, parts of which were flooded with sewage, and plates of food crawling with maggots. The hangar had only four toilets along with buckets that the detainees urinate in. The migrants said the head of the centre would often deprive them of food and water for days as a form of punishment. Doctors Without Borders, an aid agency that did manage to visit the detention facility, said it found several malnourished migrants.

At least 22 migrants have died at the site since September, the migrants said. Those who died weren't buried because there is no cemetery for Christians, migrants inside the facility said. Instead the bodies were kept in air-conditioned rooms or refrigerators.

An individual with direct knowledge of the conditions at the facility said they were eventually buried. He also spoke on condition of anonymity because he wasn't authorised to speak to the press.

At least 100 others are sick with disease, mainly tuberculosis, migrants said.

"Our life is worse and terrible from day to day," said one Eritrean migrant.

Libyan authorities say they have over 50 detention centres but it's not clear how many are actively used to house migrants. Some of the centres have been ordered shut down because of human rights violations. Many of them are known to be rife with torture and human rights abuses, according to UN and rights groups.

The Zintan facility has such a bad reputation that migrants in other detention centres caught in the crossfire of fighting between Libya's factions refuse to be sent there.

"They prefer to die under bombs and not go through the slow death in Zintan," said Giulia Tranchina, a human rights lawyer from the Britain-based Wilsons Solicitors who has been in direct contact with migrants trapped in Zintan and other places.

The manager of the facility is known for punishing migrants by shutting of access to electricity, water, and locking them up for a prolonged period of time, migrants said.

In May, the migrants rioted. About 30 managed to escape from the detention centre. Five were caught and returned to the facility. The rest disappeared, migrants and aid officials said.

Julien Raickman of Libya's Doctors Without Borders called the Zintan facility a health disaster. "A tuberculosis outbreak has likely been raging for months in the detention centre," he added.

Raickman believes migrants in the facility have been neglected because it's "away from the main effort by the humanitarian actors in and around Tripoli."

Activists and migrants said they have sent messages and emails to the U.N. and its partners for months about conditions at Zintan. After photos from inside the site emerged in June, the UNHCR intervened and evacuated 96 migrants from a separate building at the facility where it had access. They were sent to the one U.N.-run center for migrants in the country, in Tripoli.

UNHCR chief Filippo Grandi told the AP he disagrees "in the strongest terms" with the contention the agency has not been trying to help. He said it has been barred from entering some detention centres.

He said the agency is trying to gain access to the entire detention centre at Zintan.

In principle, aid workers must negotiate with multiple rival militias to get into facilities, provide medicines and extract those it can to safety, he said.

Grandi said his agency has succeeded in sending 4,000 migrants to Niger to await resettlement, while the International Organization for Migration has helped some 35,000 return to their home countries.

"If we and IOM and other humanitarian organisations were not on the ground in Libya trying to help, even the few thousand people that we have managed to save — saving their lives literally — would have been exposed to almost certain death, abuse, torture and worse," he said.

He said other countries need to step forward to take in migrants for resettlement.

He criticised the European Union, saying "it made a choice" to empower Libya's coast guard to intercept migrants at sea and bring them back to Libya. "These people are returned back to one of the most dangerous places on Earth," he said.

Tarek Lamloum, head of the Libyan rights group Beladi, said he had made direct appeals for trapped migrants to the U.N. but had seen no action. "We are fully convinced that there is a great deal of negligence by the UNHCR toward what the migrants are going through," he said.

Libya became a major crossing point for migrants to Europe after the 2011 ouster and killing of longtime dictator Moammar Gadhafi. The North African nation was thrown into chaos, armed militias proliferated, and central authority fell apart.

A weak, U.N.-aligned administration in Tripoli oversees the west, where Zintan is located, but much of its powers are in the hands of militias. Eastern Libya is controlled by a rival government aligned with the self-styled Libyan National Army led by Field Marshal Khalifa Hifter, who in April launched an offensive on Tripoli.

Col. Nasser Nakoua, who runs the detention centre in Zintan, denied there was any lack of access to the facility.

"Those saying that they have no access are just lying. The doors are open and we want the agencies to come and help or just shut the place down, because there is severe shortage in everything," he told the AP by phone.

He blamed the government, which is nominally in control of the facility, for failing to fund its operations. "We received nothing from Department for Combating Illegal Migration," he said, referring to the body in charge of the facilities, "not a single penny."

He said the catering company contracted to deliver meals warned this month that it would stop delivering food if payments are not made. He said he is searching for a new company.

"I wrote many times to the DCIM and there is no response whatsoever," he said. "Problems of malnutrition and disease surged because of lack of funds and support."

He denied depriving the migrants of food or water, saying "these are humans at the end."

European funding of Libya's coast guard has dramatically reduced the perilous Mediterranean crossings. The number of people entering the EU via the central Mediterranean Sea route, most from Libya, was cut to 23,400 in 2018, down from 180,000 two years earlier.

In the first four months of this year, it was down another 91 percent from same period the year before, with 880 crossings, according to Frontex, the EU's border agency.

But that has left thousands stranded in detention centre's.

Tranchina said that in one centre in the coastal town of Zawiya, migrants who had endured beatings and torture by guards banged on doors and tried to break out. Guards opened fire, killing one and wounding others, she said.

The detention centre at Zintan is made up of two parts — the hangar and a smaller building.

An official with International Medical Corps said it had established a clinic at the smaller building and was providing health care. He said reports of lack of food and water were untrue, though quality was poor, and that guards sometimes withheld water as punishment.

He acknowledged that his group could not get into the hangar where most of the migrants were held until last month, and that it was up to guards to bring out detainees for medical treatment.

An aid worker with Doctors Without Borders said he was able to visit the hangar at one point.

He said in an email that migrants told him it was the first time in seven months that guards had opened the doors. He said 60 women and six children under the age of 12 had been held there for a year and the half, confirmed at least 20 deaths and said and at least 60 sick migrants, most suffering from tuberculosis, were held in a single cell.

"I never saw people abandoned as much as in Zintan and Gharyan," he said, referring to another centre in a nearby town. "The level of despair of the detainees is beyond words."