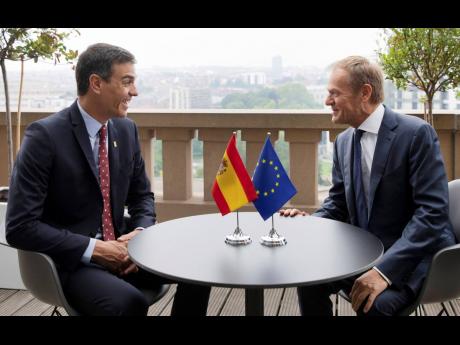 The Associated Press
Spanish Prime Minister Pedro Sanchez (left), speaks with European Council President Donald Tusk during a meeting on the sidelines of an EU summit in Brussels yesterday.

European Union leaders struggled on Sunday to narrow down a list of candidates for key posts at the helm of the 28-nation bloc amid deep divisions over how to best balance political, geographic, and gender considerations.

Some five hours after leaders began arriving at the EU headquarters in Brussels, the full summit still had not got under way. Leaders met in pairs or huddled in groups, looking for ways to break an impasse in the selection process.

The summit was the third in just over a month aimed at nailing down the appointments to the EU’s top jobs. They include picking a replacement for Jean-Claude Juncker as president of the EU’s powerful executive arm, the European Commission, and for Donald Tusk as head of the agenda-setting European Council.

Some leaders also discussed the roster of upcoming vacancies, which will include the EU’s top diplomat, the president of the European Parliament and the chief of the European Central Bank, on the sidelines of the Group of 20 Summit in Japan that concluded on Saturday.

Tusk and Juncker’s mandates expire at the end of October. Asked about likely candidates for Juncker’s job at the European Commission, Dutch Prime Minister Mark Rutte said on Sunday, “That’s a moving picture.”

“You think that one candidate or another possibly has the best chance and it keeps shifting,” he added.

French President Emmanuel Macron called for a “spirit of compromise and above all ambition” as the leaders look to name what he described as “the new Team Europe”.

Macron, like Rutte, declined to say who he was backing.

The discussions about who should take over at the EU’s helm for the next five years and beyond could go well into the night, if not through it, warned Tusk, who was chairing the meeting.

He wants nominations to be wrapped up soon, seeking to prevent further erosion of public confidence in the EU amid Brexit uncertainty and intra-bloc divisions over managing migration.

The task will not be easy. The appointments must take into account political affiliation, geography — balancing east and west, north and south — population size and gender. The leaders of EU institutions are supposed to impartially represent the interests of all member nations on the global stage and in Brussels.