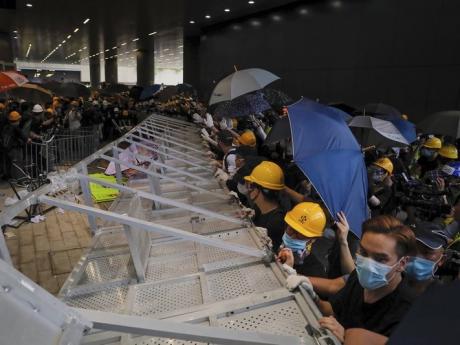 HONG KONG (AP) — A group of protesters in Hong Kong has taken over the legislative chamber, spray-painting slogans on the wall and over the territory’s emblem.

Some stood on the desks of lawmakers Friday night while others climbed up to leave their messages on the soaring wooden wall.

Police appear to have retreated to avoid a confrontation, giving the protesters the run of the building.

They smashed and tore down portraits of legislative leaders after prying open metal gates to gain access.

Meanwhile, tens of thousands of others marched through the city to demand expanded democracy on the 22nd anniversary of the former British colony’s return to China.

The protesters say the Hong Kong government is not responding to their demands for a full withdrawal of contentious extradition legislation and the resignation of city leader Carrie Lam.

Lam said earlier Monday that she would do a better job of listening to the voices of young people, but she has resisted calls to step down.