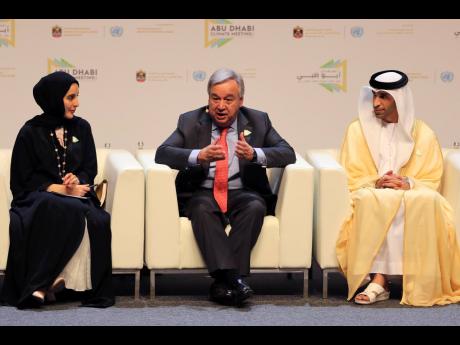 Guterres is calling on governments to stop building new coal plants by 2020, cut greenhouse emissions by 45 per cent over the next decade, and overhauling fossil fuel-driven economies with new technologies like solar and wind. The world, he said, “is facing a grave climate emergency”.

In remarks at a summit in Abu Dhabi, he painted a grim picture of how rapidly climate change is advancing, saying it is outpacing efforts to address it.

He lauded the Paris climate accord, but said that even if its promises are fully met, the world still faces what he described as a catastrophic three-degree temperature rise by the end of the century.

Arctic permafrost is melting decades earlier than even worst-case scenarios, he said, threatening to unlock vast amounts of methane, a greenhouse gas.

“It is plain to me that we have no time to lose,” Guterres said. “Sadly, it is not yet plain to all the decision-makers that run our world.”

He spoke at the opulent Emirates Palace, where Abu Dhabi was hosting a preparatory meeting for the UN Climate Action Summit in September. Guterres was expected to later take a helicopter ride to view Abu Dhabi’s Noor solar power plant.

When asked, UN representatives said the lavish Abu Dhabi summit and his planned helicopter ride would be carbon neutral, meaning their effects would be balanced by efforts like planting trees and sequestering emissions. The UN says that carbon dioxide emissions account for around 80 per cent of global warming.

Guterres was in Abu Dhabi fresh off meetings with the Group of 20 leaders in Osaka, Japan. There, he appealed directly to heads of state of the world’s main emitters to step up their efforts. The countries of the G20 represent 80 per cent of world emissions of greenhouse gases, he said.

At the G20 meeting, 19 countries expressed their commitment to the Paris Agreement, with only the United States (US) dissenting.

In 2017, President Donald Trump pledged to withdraw the US from the Paris climate agreement as soon as 2020, arguing it disadvantages American workers and taxpayers. Trump has also moved steadily to dismantle Obama-administration efforts to rein in coal, oil and gas emissions. His position has been that these efforts also hurt the US economy.

The secretary general’s special envoy for the climate summit, Ambassador Luis Alfonso de Alba, told The Associated Press it was disappointing that the US has pulled out from the accord. However, he said there are many examples of efforts at the local and state levels in the United States to combat climate change.