2020 US census to be printed without citizenship question 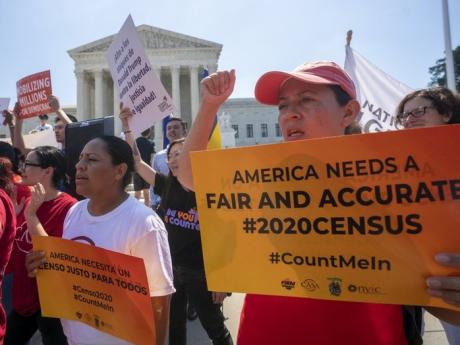 In this June 27, 2019, file photo, Demonstrators gather at the Supreme Court as the justices finish the term with key decisions on gerrymandering and a census case involving an attempt by the Trump administration to ask everyone about their citizenship status in the 2020 census, on Capitol Hill in Washington. (AP Photo/J. Scott Applewhite, File)

WASHINGTON (AP) — Days after the U.S. Supreme Court halted the addition of a citizenship question to the 2020 Census, the U.S. Census Bureau has started the process of printing the questionnaire without the controversial query.

Trump administration attorneys notified parties in lawsuits challenging the question that the printing of the hundreds of millions of documents for the 2020 counts would be starting, said Kristen Clarke, executive director of the National Lawyers’ Committee for Civil Rights Under Law.

Justice Department spokeswoman Kelly Laco confirmed Tuesday there would be “no citizenship question on 2020 census.”

Commerce Secretary Wilbur Ross said that while he respected the Supreme Court’s decision, he strongly disagreed with it.

“The Census Bureau has started the process of printing the decennial questionnaires without the question,” Ross said in a statement.

“My focus and that of the Bureau and the entire Department is to conduct a complete and accurate census.”

President Donald Trump had said after the high court’s decision last week that he would ask his attorneys about possibly delaying next spring’s decennial census until the Supreme Court could revisit the matter, raising questions about whether printing of the census materials would start as planned this month.

For months, the Trump administration had argued that the courts needed to decide quickly whether the citizenship question could be added because of the deadline to starting printing materials this week.