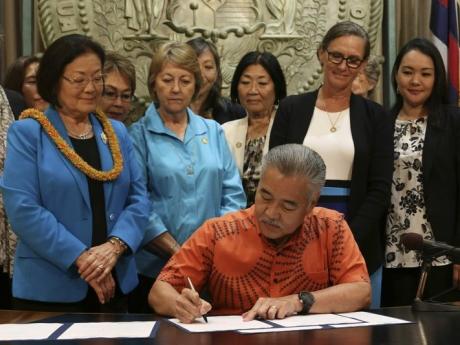 Hawaii Governor, David Ige, surrounded by members of the bipartisan Hawaii Women's Legislative Caucus and U.S. Senator, Mazie Hirono (left) wearing a lei, signs legislation in Honolulu, Tuesday, July 2, 2019, making Hawaii the first state in the U.S. to remove a requirement that a person be a victim of sex trafficking to have a prostitution conviction erased. (AP Photo/Audrey McAvoy)

HONOLULU (AP) — Hawaii has became the first state in the US to remove a requirement that a person be a victim of sex trafficking to have a prostitution conviction erased.

Legislation signed into law by Governor David Ige tosses prostitution convictions for those who avoid additional convictions for three years, even if they can’t prove they have been victims of sex trafficking.

Victim advocates say most trafficking victims aren’t able to reveal or prove they’re victims because they fear their pimp or sex buyer will retaliate.

They may depend on their pimp or trafficker for their livelihood.

The legislation passed unanimously in the state House and Senate, which are both dominated by Democrats.

Nationwide, the average age someone enters the sex trade is about 13, advocates say.

It’s similar in Hawaii, but advocates say trafficking is a bigger problem in the islands because of the large tourism industry and military population.