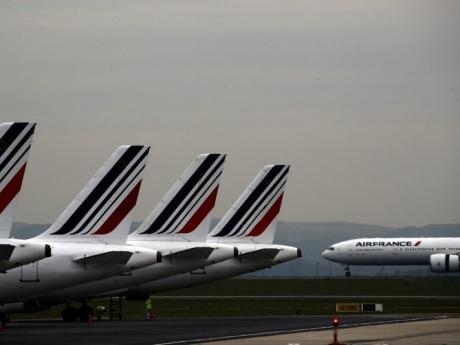 In this May 17, 2019 file photo, Air France planes are parked on the tarmac at Paris Charles de Gaulle airport, in Roissy, near Paris. (AP Photo/Christophe Ena, File)

The only exceptions will be for domestic flights to Corsica and France’s overseas territories, and connecting flights that pass through France.

It will not apply to flights arriving in France.

The move received a cautious welcome from environmental campaigners, who argue that the airline industry needs to curb its greenhouse gas emissions as part of wider efforts to combat climate change.

“This alone won’t do much, but it’s at least a recognition by the French government that more is required,” said Andrew Murphy, an air travel expert at Brussels-based group Transport and Environment.

According to Borne, domestic and European flights will be taxed at 1.50 euros for economy tickets and 9 euros ($10) for business class, rising to 18 euros for business flights outside the EU.

By comparison, Britain’s air passenger duty for standard passenger planes starts at 13 pounds ($16.20), rising to a maximum of 172 pounds ($214.20), and generates more than 3 billion pounds in Treasury revenue every year.

The French tax is expected to raise over 180 million euros ($200 million) from 2020 to invest in eco-friendly transport infrastructure, including rail.