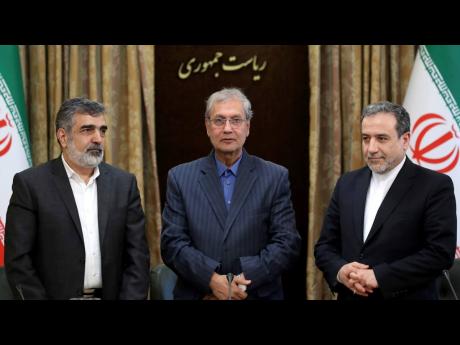 Iran on Monday began enriching uranium to 4.5 per cent, just breaking the limit set by its nuclear deal with world powers, while it is still seeking a way for Europe to help it bypass US sanctions amid heightened tensions between Tehran and Washington.

The acknowledgement by the spokesman of the Atomic Energy Organization of Iran to The Associated Press shows the Islamic Republic trying to increase pressure on those still in the 2015 nuclear deal. It also comes just days after Iran acknowledged breaking the 300-kilogram (661-pound) limit on its low-enriched uranium stockpile, another term of the accord.

Experts warn that higher enrichment and a growing stockpile could begin to narrow the one-year window Iran would need to have enough material for an atomic weapon, something Iran denies it wants but the deal prevented. While the steps now taken by Iran remain quickly reversible, Europe so far has struggled to respond.

There are fears that a miscalculation in the crisis could explode into open conflict. President Donald Trump, who withdrew the US from the nuclear deal over a year ago and reimposed crippling economic sanctions on Iran, nearly bombed the country last month after Tehran shot down a US military surveillance drone. Even China, engaged in delicate trade negotiations with the White House, openly criticised America’s policy towards Iran.

“What I want to emphasise is that the maximum pressure the US imposes on Iran is the root cause of the crisis in the Iranian nuclear issue,” said Geng Shuang, a Chinese foreign ministry spokesman.

On Sunday, Trump warned that “Iran better be careful”. He didn’t elaborate on what actions the US might consider but told reporters: “Iran’s doing a lot of bad things.”

Under the deal, Iran has been closely monitored by inspectors from the International Atomic Energy Agency, the UN’s nuclear watchdog. It said it was aware of Iran’s claims of increasing its uranium enrichment and was “in the process of verifying this development”.

Enriched uranium at the 3.67 per cent level is enough for peaceful pursuits but is far below weapons-grade levels of 90 per cent. At the 4.5 per cent level, it is enough to help power Iran’s Bushehr reactor, the country’s only nuclear power plant.

Behrouz Kamalvandi, a spokesman for Iran’s nuclear agency, confirmed the increased enrichment to the AP.

“At the moment our enrichment is at around 4.5 per cent,” Kamalvandi said. He did not elaborate.

Kamalvandi separately hinted in a state TV interview broadcast Monday that Iran might consider going to 20 per cent enrichment or higher as a third step, if the material is needed and the country still hasn’t gotten what it wants from Europe. That would worry nuclear nonproliferation experts because 20 per cent is a short technical step away from reaching weapons-grade levels of 90 per cent. Kamalvandi also suggested using new or more centrifuges, which are limited by the deal.

Foreign Ministry spokesman Abbas Mousavi said Iran appreciated the efforts of some nations to save the deal, but offered a jaded tone on whether Tehran trusted anyone in the negotiations.