Only 60% of Mexican federal police make grade for new force 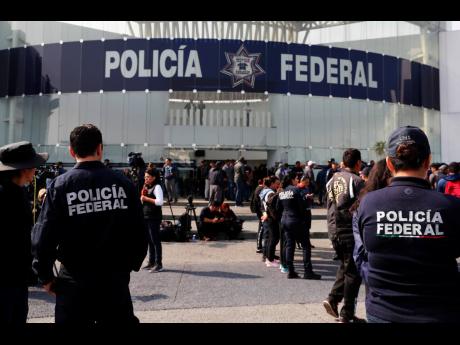 The Associated Press
Striking police continue to hold a federal police command centre in the Iztapalapa borough, Mexico City, on Thursday, July 4, to protest against plans to force them into the newly formed National Guard. On Wednesday, federal police held the command centre and blocked key highways around the capital. They expressed concerns about potentially losing their salaries, benefits and seniority if they transferred to the National Guard and being left unemployed if they don’t join the new force.

President Andrés Manuel López Obrador said yesterday that only about 60 per cent of Mexico’s federal police are passing physical and background exams to join the new National Guard, despite the fact they’re considered the elite of law-enforcement personnel.

Federal police, who had better pay, training and education standards than other police, have protested recently against being reassigned to the militarized National Guard.

The police say they’re being ill-treated and will lose seniority and benefits. They have also objected to loss of pay and poorer living conditions, which the soldiers and marines who have joined the force are more used to.

Lopez Obrador has accused federal police of being unfit and corrupt, and he said yesterday that only 60 per cent passed tests to join the new force, compared to 90 per cent of military personnel.

The president said the police had failed to keep fit, though he acknowledged he himself, at age 65, suffers from high blood pressure.

The government said it has reached a deal to let federal officers retire or join other law-enforcement agencies if they don’t want to go to the National Guard or are rejected.

The new National Guard members will live in the regions where they are based and won’t be given deployment bonuses.

Some observers have expressed concern that some officers might join criminal gangs after they leave the force. Defecting police and soldiers have long played a role as mid-level leaders and trainers of drug gangs in Mexico.