Tropical Storm Barry forms in US Gulf, could become hurricane 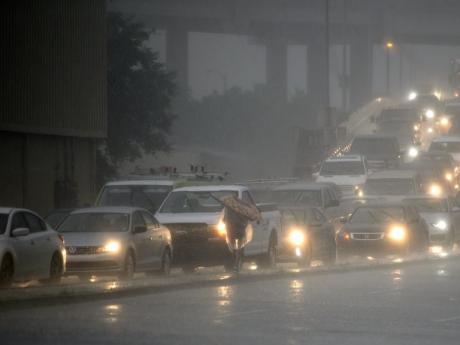 Traffic backs up as rain come down at Airline Drive and S. Carrollton Avenue in New Orleans, as severe thunderstorms cause street flooding Wednesday, July 10, 2019. (Max Becherer/The Advocate via AP)

NEW ORLEANS (AP) — Tropical Storm Barry formed off the coast of Louisiana on Thursday and threatened to blow ashore as a hurricane with drenching rains that could test the flood-control improvements made in New Orleans since Hurricane Katrina 14 years ago.

Forecasters said the first hurricane of the Atlantic season could hit the state’s swampy southern tip on Friday, with the biggest danger posed not by the wind but by downpours that could go on for hours.

On Wednesday, with the gathering storm still out over the Gulf of Mexico, it dumped as much as eight inches on metro New Orleans in just three hours.

The deluge triggered flash flooding and raised fears about the even heavier rains on the way.

The river has been running high for months.

Louisiana Governor John Bel Edwards declared an emergency and said National Guard troops and high-water vehicles will be positioned all over the state.

“The entire coast of Louisiana is at play in this storm,” he warned.

New Orleans officials asked people to keep at least three days of supplies on hand and to keep their neighbourhood storm drains clear so water can move quickly.