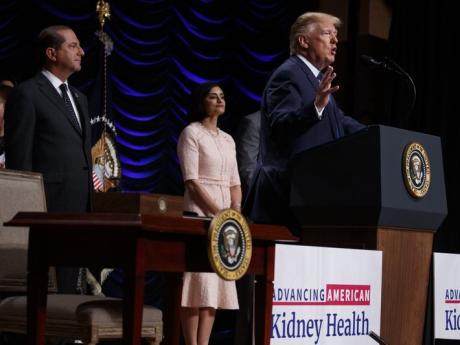 Secretary of Health and Human Services Alex Azar and administrator of the Centers for Medicare and Medicaid Services Seema Verma look on as President Donald Trump speaks during an event on kidney health at the Ronald Reagan Building and International Trade Center, Wednesday, July 10, 2019, in Washington. (AP Photo/Evan Vucci)

WASHINGTON (AP) — President Donald Trump is expected to announce new executive action Thursday to try to force the inclusion of a citizenship question on the 2020 census, even after the Supreme Court temporarily blocked the effort.

Trump tweeted Thursday morning that he would be holding a news conference on the subject following a White House “Social Media Summit.”

A senior administrator official, speaking on condition of anonymity to preview the plans, said the president would be announcing new action, but did not elaborate on exactly what Trump planned to sign.

Any such action would likely draw immediate legal challenge, and officials were still scrambling to finalise the language in the hours after Trump’s tweet.

Trump said last week that he was “very seriously” considering an executive order to try to force the citizenship question’s inclusion, despite the fact that the government has already begun the lengthy and expensive process of printing the census questionnaire without it.

An executive order, by itself, would not override court rulings blocking the question, though it could give administration lawyers a new basis on which to try to convince federal courts the question passes muster.

Critics and experts worry that including a citizenship question for the first time since 1950 will discourage those living in the country illegally from participating.

Keeping the prospect of adding the question alive could also scare some off from participating, while showing Trump’s base that he is fighting for the issue, even if it never happens.