Trump abandons bid to include citizenship question on census 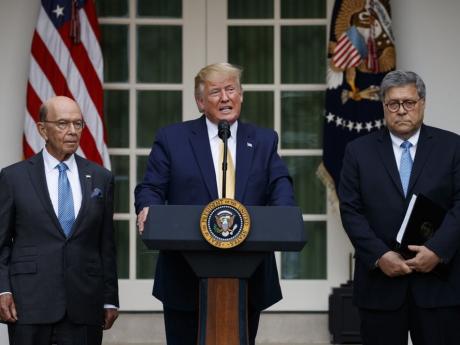 He insisted he was “not backing down,” declaring in a Rose Garden announcement that the goal was simple and reasonable: “a clear breakdown of the number of citizens and non-citizens that make up the United States population.”

But the decision was clearly a reversal, after the Supreme Court blocked his effort by disputing his administration’s rationale for demanding that census respondents declare whether or not they were citizens.

Trump had said last week that he was “very seriously” considering an executive order to try to force the question.

But the government has already begun the lengthy and expensive process of printing the census questionnaire without it, and such a move would surely have drawn an immediate legal challenge.

Instead, Trump said Thursday that he would be signing an executive order directing every federal department and agency to provide the Commerce Department with all records pertaining to the number of citizens and non citizens in the country.

Trump’s efforts to add the question on the decennial census had drawn fury and backlash from critics who complained that it was political, meant to discourage participation, not only by people living in the country illegally but also by citizens who fear that participating would expose non citizen family members to repercussions.