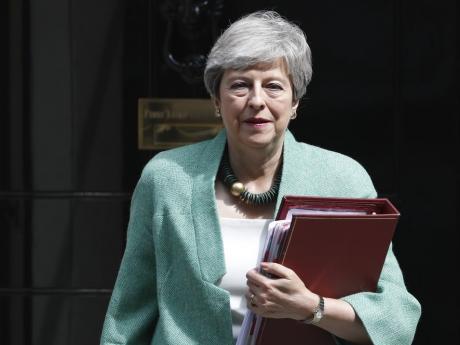 LONDON (AP) — Outgoing British Prime Minister Theresa May has levelled a thinly disguised swipe at Conservative Party front-runner Boris Johnson as she underscored the necessity of character in taking on the country’s top post.

May told the Daily Mail in an interview published Friday that the job of prime minister is not about power but about public service.

Though she didn’t mention Johnson by name, he has made a career out of being the biggest personality in the room.

“All too often, those who see it as a position of power see it as about themselves and not about the people they are serving,” she said.

“There is a real difference.”

May stepped down from being Conservative Party leader after her failure to get Parliament to approve a plan for Britain’s departure from the European Union.

Johnson and Foreign Secretary Jeremy Hunt are in a runoff for that post, which will also make the winner Britain’s next prime minister.

The runoff vote will be announced on July 23.

May underscored she had done all she possibly could to try to get her Brexit deal approved and did nothing to conceal her frustration with the fact that some of her most strident opponents on Brexit are those now backing Johnson.

She added it’s unlikely that her successor will negotiate further Brexit concessions from the EU.

May, who will return to Parliament as a lawmaker, also took issue with those who chided her for becoming emotional as she announced her departure from the post.