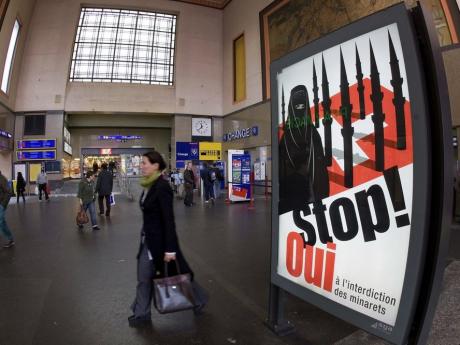 In this November 4, 2009, file photo, people walk by a poster from the right-wing Swiss People's Party (SVP/UDC) depicting a woman wearing a burqa in front of a Swiss flag upon which are minarets which resemble missiles, at the central station in Geneva, Switzerland. (Salvatore Di Nolfi/Keystone via AP, File)

NEW YORK (AP) — Government restrictions on religion have increased markedly in many places around the world, not only in authoritarian countries, but also in many of Europe’s democracies, according to a report surveying 198 countries that was released Monday.

The report released by the Pew Research Center, covering developments through 2017, also seeks to document the scope of religion-based harassment and violence.

Regarding the world’s two largest religions, it said Christians were harassed in 143 countries and Muslims in 140.

This was Pew’s 10th annual Report on Global Restrictions on Religion.

It said 52 governments, including those in Russia and China, impose high levels of restrictions on religion, up from 40 governments in 2007.

It said 56 countries in 2017 were experiencing social hostilities involving religion, up from 39 in 2007.

Pew said the Middle East and North Africa, of the five major regions it studied, had the highest level of government restrictions on religion, followed by the Asia-Pacific region.

However, it said the biggest increase during the 2007-2017 period was in Europe, where the number of countries placing restrictions on religious dress — including burqas and face veils worn by some Muslim women — rose from five to 20.