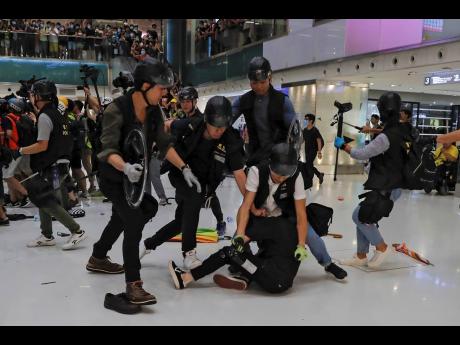 AP
A protester is tackled by policemen after a scuffle inside a shopping mall in Sha Tin District in Hong Kong yesterday. Police in Hong Kong fought with protesters as they broke up a demonstration by thousands of people demanding the resignation of the Chinese territory’s chief executive and an investigation into complaints of police violence.

Police in Hong Kong fought with protesters yesterday as they broke up a demonstration by thousands of people demanding the resignation of the semi-autonomous Chinese territory’s chief executive and an investigation into complaints of police violence.

The protest in the northern district of Sha Tin was peaceful for most of the day, but scuffles broke out when police started clearing streets after nightfall. Some protesters retreated into a shopping complex, where they and police hit each other with clubs and umbrellas.

The police appeared to arrest some people, but reporters couldn’t see how many. The violence wound down toward midnight as the remaining protesters left the area.

The demonstration added to an outpouring of grievances this year against the former British colony’s leaders. Critics complain that they are eroding Hong Kong’s freedoms and autonomy and are more responsive to the Beijing government than to the territory’s people. The mainland promised Hong Kong a “high degree of autonomy” for 50 years after its 1997 return to China.

Police on Saturday broke up a protest in a separate area of Hong Kong complaining about an influx of mainland traders.

Organisers said 110,000 protesters took part, while police put the number at 28,000, according to broadcaster RTHK.

A government statement said the afternoon march was “peaceful and orderly”, but that afterwards some protesters “violently assaulted police officers”.

“Society will absolutely not tolerate such violent acts,” the statement said.

The protests began last month in opposition to a proposed extradition law but have swelled to include complaints about an influx of mainland Chinese into Hong Kong and that Chief Executive Carrie Lam’s government fails to address the needs of its people.

Communist authorities have tried to discredit the protesters by saying unidentified “Western forces” are inciting them to destabilise Hong Kong. Protesters deny foreigners have had any role in the demonstrations.

On Sunday, protesters demanded an investigation into complaints that police assaulted participants in earlier demonstrations against the extradition law.