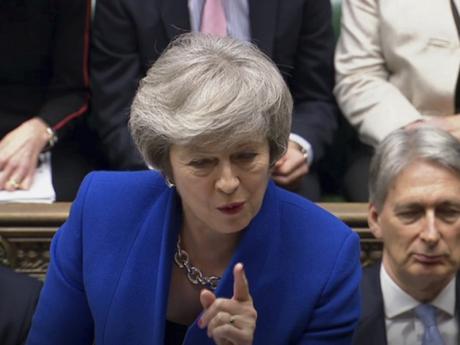 Trump tweeted Sunday that the liberal Democrats should go back to the “broken and crime infested” countries they came from. All four are American citizens and three were born in the United States.

May, who is set to step down next week following her resignation over Brexit, thinks “the language which was used to refer to the women was completely unacceptable,” spokesman James Slack said.

Boris Johnson and Foreign Secretary Jeremy Hunt, the two politicians in the runoff to replace May as Conservative Party leader and U.K. prime minister, agreed.

“If you are the leader of a great multiracial, multicultural society, you simply cannot use that kind of language about sending people back to where they came from,” he said during a debate with Hunt.

His political rival echoed the sentiment.

“I have three half-Chinese children,” said Hunt, whose wife is Chinese. “And if anyone ever said to them, ‘Go back to China,’ I would be utterly appalled.”

Johnson declined to answer when he also was asked if Trump’s words were racist.

The comments come at a testy time for U.K.-U.S. relations.